Exeter edge past Leeds Beckett to stay on top 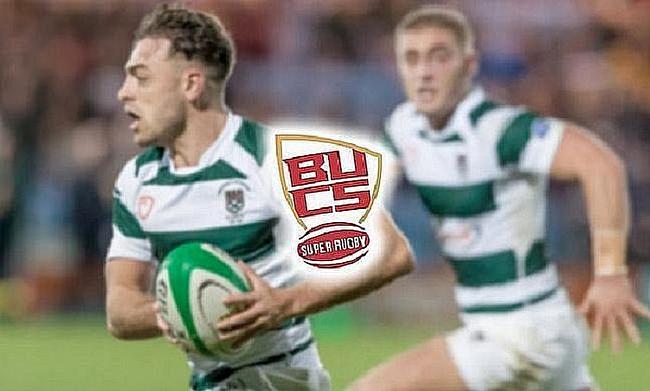 Shanahan: 'Last year we lost too many lineouts and it cost us massively'
Swansea stun Bath to continue impressive start
Exeter and Cardiff make it two on the bounce
BUCS Super Rugby is the goal, but new-look Newcastle won’t be rushed

The University of Exeter got their BUCS Super Rugby campaign back on track thanks to a last-gasp victory over Leeds Beckett.

The current domestic champions saw their winning start to the season come to an end last week as they lost to rivals Hartpury, but they responded by squeezing past Leeds Beckett to stay two points clear at the top.

Durham made it four wins from four as they beat Cardiff Met as the North-East outfit remain the only undefeated side in the division whilst there were also wins for Hartpury, Swansea and Loughborough.

Below is a review of this week’s BUCS Super Rugby action plus, we look back at the Women’s National division results as well as all the goings on in our other featured leagues and cups.

The University of Exeter bounced back from their first loss of the season (31-24) to current BUCS Super Rugby Championship holders Hartpury by beating Leeds Beckett University 23-21 this week.

The current domestic champions left to late on Wednesday, but Harry Bazalgette kicked over a dramatic conversion following Arthur Relton's try to leave the Green and Whites two points clear at the summit.

Exeter’s defeat last week means Durham University are the only side in the top division to boast a 100 per cent record. Alex Keay’s side currently occupy second spot in table following four wins from four including recent victories over Northumbria University and Cardiff Met University, respectively.

Fourth-placed Swansea University have continued their impressive start to life in BUCS Super Rugby. Following on from their tremendous win over Bath two weeks ago, the Welsh side defeated Northumbria 31-14 on Wednesday with Brandon Wood grabbing a brace.

The University of Bath, who currently sit in sixth place, may have lost to Hartpury this week but their result of the season so far came nine days ago when they thumped Cardiff University 52-25 at the Rec. Aaron James’ side ran in eight-tries during their Anniversary fixture with man of the match Jordi den Hartog scoring a hat-trick.

Elsewhere in BUCS Super Rugby, Cardiff Met are seventh in the standings with their latest victory occurring two weeks ago against Loughborough University. Danny Milton’s side won 27-3 to record their second triumph of the campaign whilst Loughborough were able to bounce back against Cardiff’s city rivals on Wednesday.

Rhys Edwards’ side defeated Cardiff Uni 32-17 on the road to clinch their first win of the term and the Midlands club are now five points clear of bottom of the table Northumbria, who are still searching for their first points of the season.

The University of Edinburgh reman on top of BUCS’s Women’s National league thanks to an unbeaten start to the season. A convincing win over Durham University on the opening day has been backed up by a 39-7 triumph against Cardiff Met as well as a 41-15 victory at champions Exeter on Wednesday.

Northumbria University sit second in the table and after losing 44-12 in Round Two against Durham, the North-East side hit back to defeat Hartpury 36-19. Some more good news for Northumbria this week saw Caitlin Simpson earn a call-up to the England Women’s U20 squad for the 2019-20 campaign.

Cardiff Met University are the highest-placed southern side in the competition as they currently occupy third spot in the division. The most decorated team in the university women’s game did lose to Cardiff Met two weeks ago, but reacted superbly by beating last year’s finalists, Durham, 38-25.

Today’s games were played in the memory of Elli Norkett and Brooke Morris ??

A 41-15 win over Exeter was an impressive way for Hartpury to open their account for this season, but on Wednesday, the Gloucestershire outfit failed to double their tally of victories as they lost out to Northumbria.

Meanwhile, the two sides who reached Twickenham last term are propping up this newly formed division at the moment as Durham and Exeter wait to ignite their respective 2019/20 campaigns.

Nottingham Trent University have maintained their 100 per cent record in Men’s Premier 1. The Midlands club, who were relegated from BUCS Super Rugby last year, have won all four of their matches including successive wins over Durham 2nds and the University of Leeds, respectively.

Trent have dropped just one point all term with their nearest challenge for top spot coming in the shape of the University of Edinburgh. The Scottish outfit are seven points behind the league leaders and that is despite back-to-back losses and Loughborough 2nds and the University of Nottingham.

In the south, Hartpury 2nds are top of the division whilst Exeter 2nds sit just behind them following a 27-19 triumph over Bath 2nds as well as a convincing 41-20 win against Cardiff 2nds. Elsewhere, newly promoted St Mary’s University are still searching for their first victory of the campaign.

Manchester Met University are certainly enjoying life in Men’s Premier 2 as they currently sit on top of the pile. A 24-7 win over Glasgow in the league was followed by effectively a bye in the first round of the BUCS Trophy as Keele University conceded the match.

Leeds Beckett 2nds and the University of Sheffield are level on nine points in Men’s Premier 2 and are they both two points behind MMU. The sides were on cup duty this week as well and both picked up wins with Beckett thrashing East Anglia 81-12 whilst their Yorkshire counterparts eased to a 31-0 win over St Andrews.

Premier 2 North sides Manchester, Bishop Burton, Strathclyde and Glasgow also progressed into the next round of the cup, which will be played on November 20th.

It is a similar story in Premier 2 South as it is in Premier 1 South as Exeter 3rds and Hartpury 3rds are the top two in the division. This time around, it is Exeter’s turn to hold a 100 per cent record and they sit four points clear of their old foes as things stand.

Both sides also advanced into the next round of the cup this week with Exeter hammering Sussex 50-10 whilst Hartpury received a bye.

Fellow Premier 2 South side UWE were stunned by the up and coming Brunel University who won 43-10 thanks to four tries from Charly Tchen whilst it was a much more straightforward afternoon for the likes of Reading, Brighton and Portsmouth who received byes in the BUCS Trophy. Elsewhere the University of Gloucestershire, who also compete in the third tier, lost to Bristol 2nds.