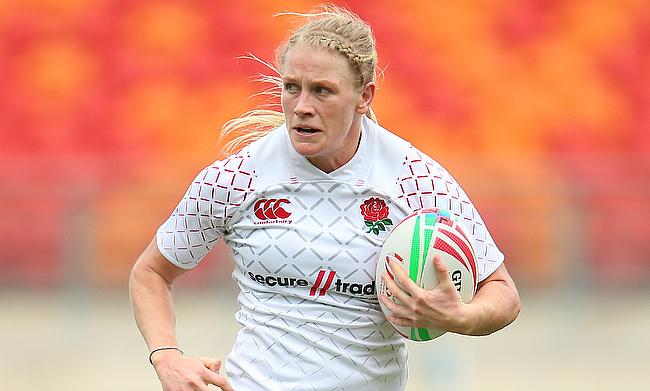 Alec Coombes Exclusive: “I went to the Hong Kong Sevens as a kid - now I want to play in the Olympics”
Paddy Kelly Exclusive: “Sevens has reinvigorated me as a player”
England and GB Sevens star Phil Burgess announces retirement
Jamie Farndale Exclusive: “It’s all I’ve thought about since missing out on Rio”

If you had asked Alex Matthews what she thought about sevens rugby back in 2016, you might not have liked the answer if you are a big fan of the abbreviated game.

She openly admits that she “hated sevens” after an unenjoyable time in the sport leading up to the Rio Olympics.

However, after the 2017 XV-a-side World Cup, the then England Sevens head coach James Bailey put his faith in Matthews and convinced her to re-join the national team squad that she had previously been a part of for a couple of years from 2014 onwards.

And since that moment, Matthews, now 27, has rediscovered her love for sevens and was starring on the World Sevens Series with England at prop before Covid-19 halted things after the tournament in Sydney in February 2020.

Not everything has been completely smooth for Matthews over the last 14 months or so, of course. Like us all, she had highs and lows in lockdown and with the future of England Sevens in doubt, she moved back to play XVs for Worcester and the Red Roses - but she has knuckled down.

Some trips in her campervan with her partner last summer helped clear her head and when she returned to XVs for the start of the 2019/20 campaign, she hit the ground running and now Matthews has two more Six Nations titles to her name and over 40 caps for her country in the back-row.

“Life is full of highs and lows both on and off the pitch and the last year or so has magnified that, but it has also allowed me to step back and really think about my rugby,” she told TRU ahead of the International Rugby Sevens Olympic preparation event at St. George’s Park, the national football centre, which runs from Saturday to Monday.

“Rugby has been a job for me for a number of years both in XVs and sevens, but when you strip it all back, I play because I love throwing a ball about with my friends and I love the camaraderie and friendships that the sport gives me.

“I used to be scared to make mistakes, now I play with more freedom and with a smile on my face and it has been such a buzz being back in GB Sevens camp since the end of the Six Nations.

“Though if you had asked me a few years ago, I’d have said I hated sevens, I wasn’t athletic enough for it and I was just a standard XVs player.

“I didn’t enjoy my experience in the last Olympic programme within sevens and I left just before the Olympics in Rio came around.

“When I was back in XVs with England, we went to the 2017 World Cup and I wasn’t sure what I was going to do after the tournament finished.

“I had been in professional rugby since I had graduated from university in 2014 and wasn’t sure what my future held, but James Bailey convinced me to give sevens another go and I am so glad he did.”

Preparation event: “We are just ready to play!”

The wider GB Sevens squad first came together back in February 2020 in Edinburgh and but since the first lockdown, there have been hundreds of Zoom calls between the players from England, Scotland and Wales and the coaching staff.

Then over the last couple of months, the group has been spending time in Loughborough and Saturday to Monday will be their first run out as a team when they take on Ireland and France.

“When I came into camp after the recent Six Nations, I was thinking to myself ‘I don’t know how to play sevens, I’m no good at sevens’ and that was playing on my mind, but after a week or so, I felt like I had never been away from sevens although the lungs took a bit longer to get used to it,” Matthews states.

“We are just ready to play to see where we are at as a squad and we want to try things out in matches that we have been working on in practice such as the shift in our defensive structures and the way we are looking to play.

“We have been pushing the aggression in ‘D’ this week at training and the attack has been coming together so this tournament will really be able to give us a benchmark of where we are at to build from and work on lots of different kinds of combinations.

“It may take us time to get things right out on the pitch and we will have to problem solve out there, but it will just be so good to be playing again and to think that we are a few weeks away from potentially being selected for an Olympics in Tokyo is mad.

“I used to think growing up only superheroes went to the Olympics, but now I have the chance to potentially be there and that blows my mind a bit.”

Scott Forrest: “Around the squad, Alex adds so much”

GB Sevens women’s head coach Scott Forrest believes Matthews’ experience in both sevens and XV’s at the top level is invaluable to the group.

“Alex is a very calm person and around the squad, she adds so much both on and off the pitch,” the Scotsman, who himself played in the Delhi Commonwealth Games in 2010, said.

ICYMI | #GB7s will be hosting a three-day international 7s tournament this Saturday, which you'll be able to watch LIVE on @EnglandRugby ??

“In terms of her rugby experience, she has had success at the highest level and pre-Covid, her performances on the World Sevens Series were up there with anyone in her position.

“She has gone back to XVs and been able to be part of a winning England side and she seems to have taken that on because she has been bouncing about around the place and seems to be really enjoying her training.”

Meanwhile, Forrest has confirmed that England’s Lydia Thompson is training with the group and that Scotland’s Rhona Lloyd has recovered from injury and will be involved in the coming days, all being well.