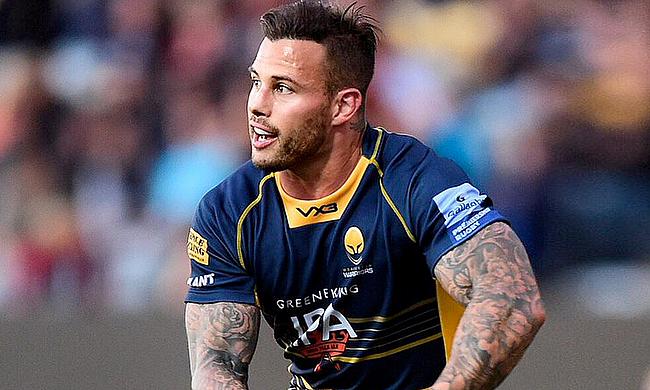 The South African was pivotal in a crucial month for the Warriors as they guaranteed their place in Gallagher Premiership Rugby for next season.

“Francois has been a central figure, absolutely world-class” said Ugo Monye, former England and Lions wing who is now a BT Sport pundit, covering Gallagher Premiership Rugby. “You have that feeling that if Francois plays well, Worcester will go well.

Hougaard was presented with his award by Adrian Snelgrove, a Gallagher Community Hero for Worcester Warriors, recognised for his work in helping adapt rugby for the visually impaired and thus making it an inclusive sport for the blind community.

Adrian is one of 24 Community Heroes chosen by title partner, Gallagher, at the start of their first (2018-19) season. Each of the heroes were nominated by their respective Gallagher Premiership Rugby teams for demonstrating the core values and spirit of rugby and using their energy, commitment and passion to protect and grow the game.

Monye added: “When you play scrum-half, you touch the ball more than anyone, so the impact which you can have on the game is huge. For someone that’s on the ball as much as Francois, it feels like none of his involvements within those big matches are wasted.

Adrian Snelgrove said of the presentation: “I have been following rugby for 40 years, the game is a true passion of mine and to present the Gallagher Premiership Rugby Player of the Month award was something I never thought I’d have the opportunity to do. It was incredible to meet Francois and I’d like to say a massive thank you to Gallagher for making a long-held dream come true.”

Throughout the season, Gallagher, itself a passionate community insurance broker, has embarked on a series of CSR initiatives as part of its ongoing commitment to rugby, working with Premiership Rugby to shine a light on the positive work that is being done around the game, both at scale and within the local communities.

Hougaard – as part of his prize for being named Gallagher Premiership Rugby Player of the Month – wins 25 tickets to a future Worcester Warriors match to be gifted to a local club, school or community group of his choice.

Hougaard was judged by a panel of experts as the player who made the biggest impact in Gallagher Premiership Rugby over the month of April.

Hougaard wins a trophy and 25 tickets to a future Worcester Warriors Gallagher Premiership Rugby match which he can donate to a local rugby club, school or community group.