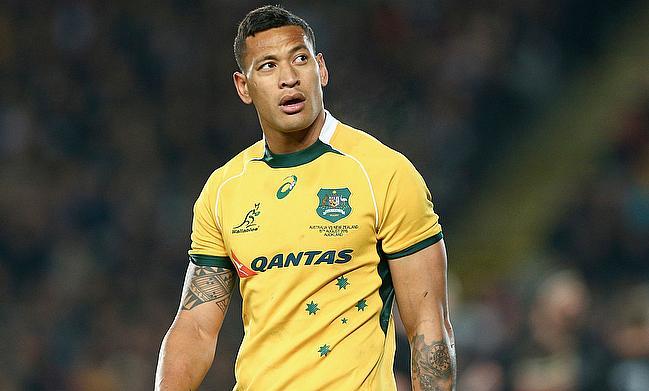 Israel Folau has received a one match ban after making contact in the air with Peter O'Mahony in Australia’s third Test defeat against Ireland.

Folau will now miss the Waratahs’ upcoming Super Rugby match against the Rebels, but Rugby Australia has revealed that they will appeal the decision.

The full-back was shown a yellow-card in Sydney and was given a citing commissioner's warning over two aerial contests after O'Mahony, who was lifted by a team-mate, landed awkwardly.

Citing commissioner New Zealand’s Michael O’Leary said Folau" placed his left hand on O'Mahony's chest", which had pulled the Ireland captain "over and he toppled to the ground.

After the Wallabies’ 20-16 defeat, head coach Michael Cheika was asked about the sin-binning of Folau.

He said: “Rugby, there’s no black and white in this game. It’s a lot of grey and it’s about the interpretations in the grey so, yeah, I don’t know how they can clarify it, so there’s not much point in me asking about clarification.”

Since the announcement of Folau’s ban, Waratahs coach Daryl Gibson feels the outcome of the decision may have implications on aerial contests in the future.

"I believe if he does get some time, there are some real implications around the law-making process," he said.

"It really makes us look at the kick contest area and exactly how we can provide a law that provides for what is happening in terms of the collisions and guys landing on their heads."