Flo Long Exclusive: “My mum is the kindest person and the rugby community is being really supportive” 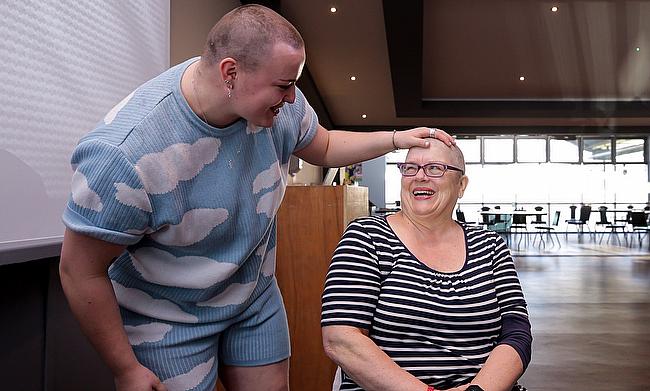 The 24 hours which saw Scotland’s Women reach the Rugby World Cup
Cara Cookland and Trudy Cowan Q&A: We have to fight for each game but we're getting a chance to build
Sarah Beckett Exclusive: 'It's probably been the toughest year in my career'
Fiona Kennedy: 'To lead Oxford in the Varsity Match is an amazing opportunity'

When Worcester Warriors’ prop Flo Long revealed her newly-shaved head to people earlier this week, some thought it looked cool, others cried and some weren’t bothered at all.

Was that the reaction of her Warriors teammates when she headed to Sixways for training? No, those were the reactions of children at the nursery a short distance from the stadium where Long works four days a week.

You can always rely on kids to be honest that is for sure, and the reactions made Long, the 21-year-old who was in some wider England squads during 2021, smile.

Smiling felt good because it has been a tough time for her family since her mum Clare Brophy was diagnosed with breast cancer in September of last year.

After several biopsies, Clare, 59, had a mastectomy in late December and then in January received the news that she will also require chemotherapy and radiotherapy.

The chemotherapy is due to start soon and will see Clare’s hair fall out, but she will begin that course of treatment hairless because last Saturday at Sixways, both she and Long had their hair shaved off in front of a group of family, friends and some of the latter’s teammates and Warriors’ support staff.

Long had her 29 inches of hair shaved off to show support to her mum and to raise funds for Macmillan Cancer Support so that she could donate her former flowing locks to the Little Princess Trust.

hairs gone. thank you for all the support, justgiving page is still open for donations https://t.co/xmd2i4yFXr@WorcsWarriorsW @macmillancancer @Premier15s pic.twitter.com/6V63HdtWql

“My mum has been my biggest supporter since day one of my rugby career and she is also my best friend, she has been there through all of the highs and the lows with me - she has sacrificed a lot for me, so the least I could do was sacrifice my hair,” Long told TRU.

“Ever since mum was diagnosed with breast cancer, it has been tough for us all, but her positivity is amazing and she is always thinking of others rather than herself.

“I wanted to do something proactive to help raise funds and awareness and I thought this would be a fitting event and something a bit different.

“My mum is the kindest, most fun person and the rugby community is being really supportive which was shown at the weekend when Worcester allowed us to use the stadium for ‘the big shave’.

“As of Wednesday afternoon, we had raised nearly £9,000 so that shows just how much the wider rugby family has got involved too. They really have helped mum and I out and given us their support in spades and we just can’t thank people enough.

“Initially I had hoped to raise £500, but I think what has been raised just shows how highly mum is regarded within the sport and out of rugby too.

“There will be some ups and downs ahead, but mum is in a good place mentally and is really focused on doing everything she can to make a full recovery. Her nature is to work hard and fight and that is what she will do.”

“Mum has always been there shouting me on from the touchline since I was four!”

Given that she first played when she was only four, it is perhaps no surprise that some 17 or so years later Long is one of the best up-and-coming tightheads in the Allianz Premier 15s and caught Simon Middleton’s eye last year.

She is not in the England squad currently preparing for the TikTok Women’s Six Nations, but she certainly has aspirations to play for the national team in the future having got a taste of life in camp previously.

“I first started playing rugby when I was four at Old Redcliffians in Bristol and then I moved to another local club Cleave before going on to play for Winscombe in Somerset,” Flo explains.

“My mum was driving me to every training session and matches at all the clubs and got involved by chatting to other parents and helping out with things where she could.

That's my girl! Thanks to everyone @WorcsWarriorsW for their support of Florence and esp making the #BraveTheShave such a success at Sixways. Coaches, Mgt team, players, catering, photography #LittlePrincessTrust #MacmillanCancerCare https://t.co/OPb2UdRAD8

“When I joined Winscombe I was just coming out of my under-15 age-grade rugby and realised that it was a sport that I wanted to take further and mum was the main one who gave me encouragement to go on that journey.

“Mum has always been there shouting me on from the touchline since I was four even if she doesn’t know any of the laws, well apart from passing backwards!”

And what a journey it has been since then. Long impressed many whilst playing age-grade rugby at Winscombe and by the age of 17, she was asked to go and play with Bristol.

"Being from Bristol, to get asked to train with them and learn from the top players there at such a young age was just amazing,” she explains.

“I had gone from the under-18s to suddenly playing against fully grown women and some internationalists. That was a bit of a shock and at first, I could only play back-row because of my age, but the experience learnt there in the first team and in the development team was invaluable.”

“Keatesy has been like a mentor to me, she is brilliant”

After nearly two years at Bristol, Long decided to leave the club in early 2020 to try and get more first-team game time.

The England under-20 cap joined Worcester Warriors and, pandemic aside, she has been loving life at Sixways.

Long feels the move has taken her game to the next level while she has been learning from a lot of experienced players in the squad coached by Jo Yapp, who currently sit eighth in the Allianz Premier 15s.

“I knew Jo from before so that helped my transition into the club and the girls have all been super friendly and welcoming, especially after the pandemic came in March 2020,” Long explains.

“There are so many good players around me and Laura Keates, or simply Keatesy as she gets called, has really helped.

“It is impossible not to learn from someone of her experience who plays the same position as me. After all, she won the World Cup with England in 2014! What an inspiration. Keatesy has been like a mentor to me, she is brilliant.

“I also really enjoy working in the nursery and getting back to Bristol to see family when I can and that balance works well and helps me enjoy - and play my best - rugby.”