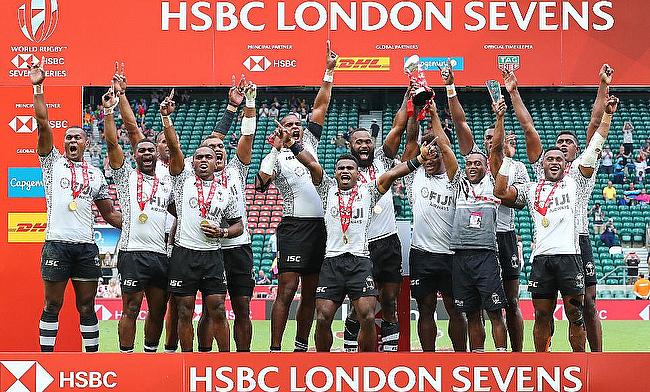 Fiji managed to hold of South Africa in the final with a 21-17 victory in the final to win the London leg of HSBC World Rugby Sevens Series.

This is Fiji's fourth consecutive series victory after they clinched the titles in Vancouver, Hong Kong and Singapore apart from winning the Hamilton leg earlier as well to take their tally to 167 points while South Africa are at second with 160 points. The final leg Paris will be played on 9th and 10th June.

South Africa managed to get their first try in just the second minute from Stedman Gans and Justin Geduld converted it to take their tally to seven points but just before the half time Josua Tuisova helped Fiji level the scores when he dotted down that was improved by Amenoni Nasilasila.

The teams headed into the second half with a 7-7 scoreline and Fiji went on to take the lead for the first time in the game when Paula Dranisinukula went over the line but Ruhan Nel responded back with an unconverted try as South Africa trailed by two points.

As the clock was ticking, Jasa Veremalua with his try gave Fiji a breather and once again Zain Davids led South Africa's response but the missed conversions on their final two tries proved to be the difference between the two sides as Fiji completed a 21-17 victory.

Fiji captain Jerry Tuwai was delighted with the victory: “I’m really happy with the boys today. It is always a pleasure to play in London and we are really blessed with all the Fijian supporters here. The victory means a lot to us, as a team and as a nation. Our goal was to come here and lift the London cup and we did. Our next goal is to win the world series so we will regroup and be ready to go again next week. We are really excited about Paris.”

Tuwai’s team mate Semi Radradra won the HSBC Player of the Final award and after receiving his medal from World Rugby Chairman Bill Beaumont, said: “I found it tough today but I got help from the boys and was hanging in there. I know we trust each other and finally we got the win.”

Earlier, Fiji topped Pool A after winning all their three group games and defeated Canada 40-7 and Ireland 38-12 in the quarter-final and semi-final respectively to reach the final while South Africa defeated New Zealand 14-5 and England 29-19 in their respective knock-out games.

Ireland though secured the third spot defeating the fourth finished England 21-19 in the Bronze final.