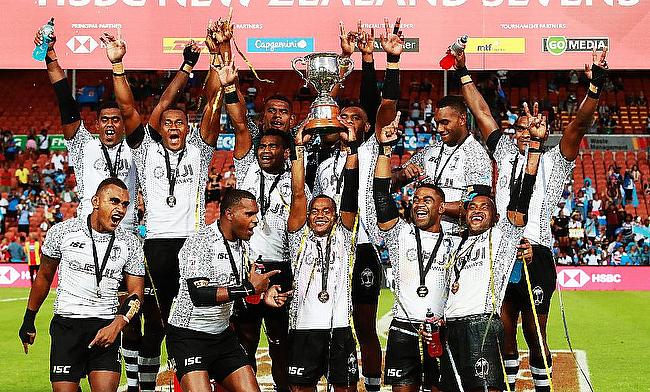 Fiji 7s registered their first triumph in the ongoing Men's World Rugby Sevens Series after edging out South Africa 7s 24-17 in the Cup Final at Waikato on Sunday.

Fiji had tight wins of 12-10 and 14-12 against Samoa and New Zealand in the quarter-final and semi-final respectively to reach the final for the first time this season while defending champions South Africa had convincing wins over Scotland and Australia to reach their third final in four attempts in the ongoing series.

Kwagga Smith gave a head start to South Africa with a second minute try but HSBC Player of the Final Alosio Sovita Naduva went on to level the scores with a try of his own a minute later. The momentum once again swung towards South Africa with Kyle Brown crossing over that was improved by Cecil Afrika but once again Fiji levelled the scores with Naduva among the tries for the second time.

Naduva took just four minutes to score his third try in response to Branco Du Preez's touchdown as the game was heading for a close finish but Eroni Sau scored the decisive fourth try to seal a 24-17 win for Fiji as they move to the third position in the overall standings that has South Africa at the top.

“We did struggle at times in the tournament and won some close games but in the final in the second half we decided we were going to play better that South Africa and we did,” he said.

“The team's character, belief and their love of their country came through and we knew we had the ability to score from anywhere. We had to believe in that and we got momentum in the tackle and in the contact areas," Fiji head coach Gareth Baber said.

Meanwhile, USA went on to beat Argentina 12-31 to win the Challenge Final.