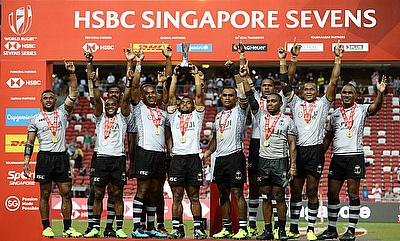 Fiji 7s secured their third consecutive series victory in the ongoing HSBC World Sevens Series as they edged out Australia counterpart 28-22 in the final of the Singapore leg that has now taken them to the top of the overall standings.

The win has taken Fiji to 145 points in the table as they overhaul second-placed South Africa with 141 with London 7s and Paris 7s left in the series while runners-up of Singapore 7s, Australia now move to the fourth place with 108 points behind New Zealand with 120 points.

HSBC Player of the Final Waisea Nacuqu gave a terrific start to Fiji with back to back tries in the 2nd and 4th minutes with Amenoni Nasilasila slotting one of the conversion. Though Australia were quick to respond with Dylan Pietsch and replacement Maurice Longbottom dotting down in the 6th and 7th minutes respectively.

Jerry Tuwai heroics in the 12th minute and a conversion from Nasilasila meant Fiji had a slender advantage of going into the break with a 14-10 lead.

Replacement Alosio Sovita Naduva extended Fiji's lead with a try at the start of the second half and despite efforts from Brandon Quinn and John Porch, Australia fell short and succumbed to a 28-22 defeat.

Captain Jerry Tuwai said “I’m speechless. Australia are a very good side and took us to the wire. We gave everything for this final.

"Winning this tournament will boost our morale going to London and Paris.

Earlier, Fiji won all the three games in the group stage and defeated New Zealand 24-19 and South Africa 12-10 in the quarter-final and semi-final respectively while Australia defeated Spain and England in the knock-out rounds to set up the final between the two teams.