Exeter Chiefs come from behind to beat Sale Sharks 22-32 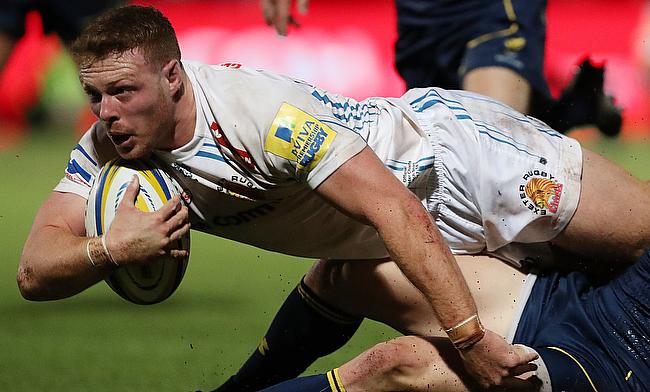 Fixture list puts spotlight on Exeter Chiefs, so can the league leaders come through unscathed?
Exeter Chiefs consolidate top position with 26-13 win over Leicester Tigers
A season to forget or can Exeter Chiefs make it a campaign to remember?

Exeter Chiefs continued their impressive form as they came from behind to beat Sale Sharks 22-32 in the 15th round of the Gallagher Premiership at AJ Bell Stadium on Friday.

This is Exeter's 11th win from 15 games as they consolidated the top position with 55 points - a 12-point lead over second placed Bristol Bears while Sale Sharks are at fourth place.

Henry Slade played a pivotal role in getting Sale Sharks open their account as he set up Olly Woodburn, who made a perfect inside pass to Sam Simmonds as he went over the line in the second minute and Joe Simmonds kicked the conversion to provide Exeter a seven point lead.

Sale Sharks brushed aside their 16-10 defeat to Harlequins with Tom Curry and Robert du Preez dotting down in the seventh and 10th minutes while the fly-half also added the extras on both the occasions to make it 14-7.

Denny Solomona came off the bench just at the end of the first quarter and Exeter cutting the deficit down to four points following Joe's penalty at the stroke of half-time.

Du Preez helped Sale Sharks restore the seven point lead with a three-pointer early in the second half but Rob Baxter's men responded back strongly with flanker Jacques Vermeulen picked up at the base of the ruck to score in the 48th minute and five minutes later it was Stuart Hogg's turn to go over the line making the scoreline 17-22.

Sale suffered a setback in the 58th minute when Tom Curry was sin-binned for a late strike on Hogg and immediately England hooker Luke Cowan-Dickie responded with a try with Joe Simmonds kicking penalty and conversion on either side to make it 17-32.

Sale had a consolation try in the closing stage when Marland Yarde found Solomona but Exeter went on to complete a 10-point victory to strengthen their chance of featuring in another final.