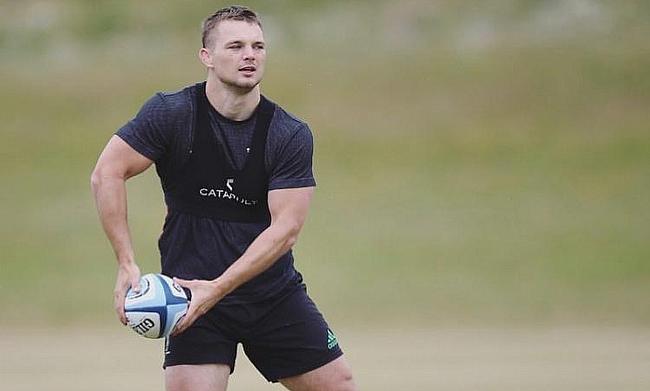 Two weeks ago when Will Evans took up his position to defend the No.10 channel against Northampton, he knew the task that faced him.

The back-rower had shifted positions to combat the sizable threat of Taqele Naiyaravoro as Harlequins looked to manipulate the Saints’ play. The tactic deployed by Paul Gustard’s side saw fly-half Marcus Smith pack down at blindside flanker whilst Evans braced himself for a collision with ‘Big T’.

With Northampton aiming to capitalise on their attacking scrum, they soon recognised Quins’ switch and bypassed Naiyaravoro to try and set up a grandstand finish at The Stoop. Instead, they were thwarted by their hosts with Evans going on to win a turnover a few phases later.

“I was terrified to be honest with you!,” Evans laughs. “I was eyeing him [Naiyaravoro] up and down thinking this is really going to hurt if he runs over the top of me. I just thought about getting my head in between his spokes and bringing him down, but thankfully he didn’t come anywhere near me!

“I think the social media video which the club produced explaining what we did was just a little bit more detail that helped the fans really engage in something they haven’t really thought about. They might not know why we do certain stuff so it was nice for them to get a bit of an insight.”

Very grateful my organs are still on the inside of my body ???? https://t.co/ZeHYYMKtBw

This wasn’t Evans’ first foray into the fly-half position, though. The 23-year-old did wear the No.10 jersey during his time at Wymondham College in Norfolk, but moved into the forwards when he was younger: “I was probably around 14 or 15 when I went in the back-row from fly-half so I was standing off scrums up until then!”

Evans isn’t ‘standing off scrums’ anymore and it is clear since the resumption of the Gallagher Premiership that ‘7’ is very much his bread and butter. The flanker has been one of Quins’ standout performers, especially in an area which has been under intense scrutiny over the last month.

The law interpretations surrounding the breakdown have put this element of the game in the spotlight with the likes of Wasps’ Jack Willis and Sale’s Curry twins rightfully receiving plaudits and Evans’ work also hasn’t gone unnoticed since the restart.

In the aforementioned fixture with Northampton, Evans was effective but pointed out an adaptation he has made to his own game in order to be successful when wrestling back possession.

“The only slight change I have tried to do is a pull on the ball,” adds Evans. “That is just a couple of quick tugs on the ball to show the ref that you have got your hands on the ball and you are trying to take the ball. Sometimes when there is a lot of playing around the breakdown, the ref can’t always see that.

“Against Northampton, I felt like when there was loads of players around there, the ref could not really see too much and I was tugging on the ball. I probably didn’t get the reward which I felt like I should have done. That is my only slight change, but it is working week to week.”

Whilst Evans has been a beneficiary of the new law interpretations, he explains the number of turnovers being awarded by referees around the breakdown actually decreases the speed of the game which in his opinion, makes the sport less appealing.

“I feel it is a little bit detrimental because it slows the game down and I don’t think it is as watchable, but for people like me and Jack [Willis] and other 7s in the Premiership, it is great for us,” Evans adds. “Clearly, they want to look after us when we’re over the ball because it is such a dangerous position when you’re down there, but the changes have been slightly averse for rugby in my view.”

One of the positive aspects of the Premiership’s return which Evans is in full agreement with is the opportunities it has presented young players. All 12 clubs have used the packed fixture schedule as a chance to blood some of their emerging talent, with Harlequins introducing the likes of George Hammond to the top-flight in recent weeks.

Evans was part of the England U20 squad which clinched the World Rugby U20 Championship title in 2016 and he feels the increased influx of homegrown players is hugely exciting for the domestic game as well as the wider international picture.

“I think it is really good,” Evans says. “We have more people playing. It is really good for people’s development. We saw young George Hammond play last Wednesday against London Irish and he helped the lads get the result [38-15 win] so I think that is probably the way to go, to use your whole squad.

“What the pleasing thing is, we have six, seven or eight really good youngsters coming through who are all 23 or below. For myself going forward, I know that our team is going to be a force to be reckoned with in the next couple of years and for our fans, they should be really excited that we have got these guys coming through.

“It is tough with the amount of games coming so thick and fast so you are probably going to pick up the extra injury but as long as you have got a really good, well stocked squad with people who have come through the academy, I think it can only be good for English rugby.”

Evans arguably falls under the ‘young, English player’ bracket with the back-rower still only 23 years-old. He feels he has already seen an improvement in his own game following his move to Harlequins from Leicester Tigers last year and since arriving at The Stoop, the forward has racked up 11 Premiership appearances and has also experienced the Heineken Champions Cup.

“I have loved my first year here,” Evans continues. “Obviously it has been really difficult over the last couple of months with Covid-19, but the thing I came here for was to be a better rugby player by the end of it. I think, from the bottom of my heart, that is actually happening. The reason I left Leicester was probably because I hadn’t got any better since I was 19.

“This past season, I think I am going from strength to strength especially working with Gussy [Paul Gustard]. We’ve got an excellent back-row too, but it has been really nice to learn off the likes of Chris Robshaw. He has been really good with me. I have learnt a lot off him.”

Evans actually made his first Premiership appearance for Leicester Tigers against Gloucester four-and-half-years ago and he is now preparing to take on the Cherry and Whites once again.

?? Our team for Kingsholm.

?? An exciting line-up with a powerful bench, excited?

For Quins, their slim play-off hopes were extinguished at the beginning of the month against Bath in front of 2,700 fans at The Stoop and 1,000 spectators will be present at Kingsholm this evening when the Quarters take on eighth-placed Gloucester.

Gustard’s side do have a Premiership Rugby Cup final to look forward to against Sale Sharks next week, but a lack of consistency has hampered their chances of challenging for more honours this term and Evans hopes his side can end the campaign on a positive note, starting with tonight’s visit to the West Country.

“We’ve just not been consistent enough at all this season,” Evans says. “I think we have only backed up a win with another win once this year [against Wasps and Gloucester back in December]. That has been the really disappointing thing.

“The thing with the Premiership Rugby Cup final is that anyone can win on the day. It is probably our biggest game all season, but the fact is that we want to end strongly. The whole idea of these last few games is that we have want to win every single one of them, starting with Gloucester on Monday. We will be disappointed if we don’t do that.”