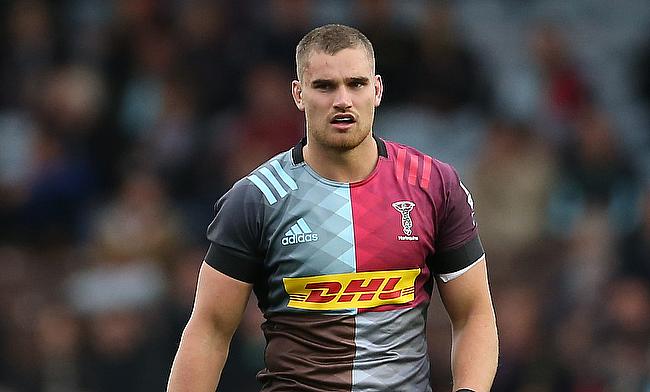 James Lang made his debut for Scotland against Canada
©Copyright Getty, by Harlequins

It has hardly been the season James Lang had been hoping for.

A strong start to the campaign was marred when an injury against Wasps meant that the 24-year-old would need surgery on a leg injury on Christmas Eve, which kept the Scotland international out of action for several months.

Due to make his comeback at outside centre for Harlequins against Sale in Premiership Rugby Cup final in mid-March, Lang’s return to action in a quartered shirt was put on hold following the coronavirus outbreak in the United Kingdom.

With the RFU ending domestic rugby below the top division, there is still a chance that Lang will be able to make his return to the pitch in the 2019/20 season and the back is hoping that this will be the case.

“I think, from a players point of view, it is quite tough just because I was out for three months with injury, due to make my return against Sale in the final and that got cancelled," said Lang. "Now we’re not knowing when we’ll be back playing. I’m just hoping that I don’t forget how to play rugby!

“It is unprecedented times and everyone is in the same boat. So, yeah I have been quite busy, so I have not had time to sit and dwell. I’ve got quite a good support network around me and I’m trying to FaceTime different lads from the team each morning, trying to socialise in different ways.”

??‍?? This is what our backs have been tasked with to keep fit. #COYQ #StaySafe pic.twitter.com/vwN0D0IPnA

Regularly talking to long-time friends Aaron Morris and Joe Marchant, Lang has also had to contend with keeping fit at home. Harlequins sent each of their players care packages with some gym equipment when they found out that they would not be allowed to have their players in training at the University of Surrey for the foreseeable future.

Doing exercises in his garden and using his hour to run drills at his local rugby club, Lang says the key to staying sharp is self-criticism and structure.

“You have got to be self-critical and keep yourself motivated to pick it up and, because we are in that limbo phase, it is one of those where you have just got to bite the bullet and make sure that you keep fit,” Lang said.

“I’m just around the corner from my local park, so I can do some stuff there and the fact that the club have given us gym equipment is a godsend because, I had nothing. I’m not sure what I would have done, and I have heard that all the gym equipment is sold out, so I wouldn’t have been able to buy any now.

“It is just about getting on with it and everyone is different, but you have got to take each day as it comes and try to get into a routine. Try and set a time for chilling, a time for working out and a time for analysis. The coaches have been really good, sending us stuff to analyse and chat away on, just to keep the mind active. Then, obviously, a good four or five yours of Fortnite always helps.”

Making his debut for Scotland in 2018, - on their tour of the USA, Canada and Argentina - Lang was hoping to stake a claim in Gregor Townsend’s plans for this summer’s trip to South Africa. With the relatively recent omission of fly-half Finn Russell from the Scotland camp during the Six Nations, there is a space to play a supporting role to Adam Hastings, if the tour still goes ahead and Russell is still out of favour.

Now potentially without the opportunity to show his international head coach what he is capable of over the coming months, should Premiership Rugby also not continue, Lang says he has been buoyed throughout his recuperation by messages from Townsend.

“After I did my leg, Gregor was really good,” Lang said. “He called me up to see how the op was, it was my first serious injury. I wanted to showcase what I could do, for that summer tour, and it was a goal of mine.

“I think it is good to set goals when you are injured, it helps to set those out. Wanting to get back fit to play for Quins, but also to try and push for that summer tour, give myself that goal and try to push myself in the best way possible to get that goal.”