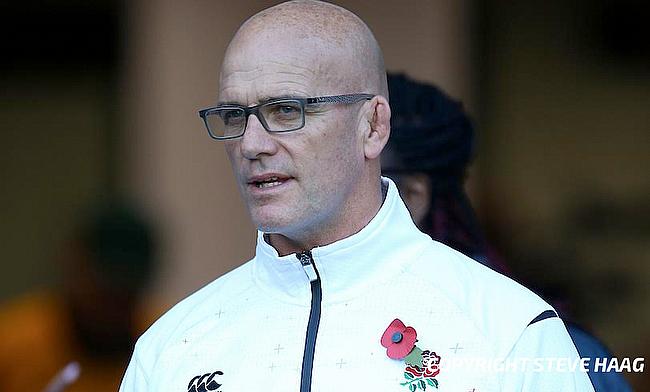 John Mitchell has been impressed with Alex Dombrandt
©Steve Haag

John Mitchell admits Alex Dombrandt has been ‘quite outstanding’ during his time with the England squad as Eddie Jones’ side continue to prepare for the Rugby World Cup.

Just over 12 months ago, Dombrandt graduated from Cardiff Met University before bursting on to the professional rugby scene with Harlequins and England’s assistant coach has enjoyed working with the 22-year-old.

After missing out on a spot in the original World Cup training squad following his debut in the non-cap victory against the Barbarians in June, Dombrandt is currently part of England’s training camp in Italy having replaced the injured Brad Shields.

England will keep an eye on the progress of Shields after he sustained a tear in his lower foot, but Mitchell was full of praise for Dombrandt.

“Alex has basically been with us right from the start when the EPS squad was named,” said Mitchell. “He is a young athlete so he is progressing nicely.

“Every day he is getting a little bit better and he is learning a lot. I have actually really enjoyed him and he’s been quite outstanding in the programme.

“He is very coachable. He is obviously growing week by week. He has got a really nice manner about him, but he quietly goes about his work and he has got exceptional open skills. He can certainly cut a line break which is really impressive.”

Mitchell added: "Brad has got a tear in the lower foot. It's always a little bit niggly and it's four to six weeks for him, but we will continue to appraise his recovery and see where he gets to.”

Mitchell, meanwhile, also offered an update on Jack Nowell. The winger had to leave Italy for an assessment on the ankle injury he suffered in the Gallagher Premiership final last month.

The defence coach revealed he was unsure whether Nowell would be available for selection, but he was keen to stress the importance of everyone being ‘ready’ during a World Cup campaign.

“Jack is going really well. He has just returned for a routine surgical review” Mitchell added. “That was something in his programme.

“Everyone is working towards that one milestone [the 31-man World Cup squad announcement on August 12th] but there is still a lot of time between then and the World Cup and that is why we are preparing everyone.

Two players who are not currently training in the intense humidity of Italy are Ben Moon and Danny Cipriani.

Danny Cipriani omitted from England squad for Treviso training camp with no explanation from Eddie Jones.
Since being named in official RWC training squad, Cipriani will have been in camp for just one week out of a possible four.

The duo were notable absentees from the travelling party and in terms of Cipriani, his World Cup dreams seem to be fading away.

With England’s first warm-up match against Wales fast approaching on August 11th, Mitchell was quick to reiterate his stance: “Him [Cipriani] and Moony are both very good players so we have got excellent players in the side and excellent players outside. Like I said before, everyone has to be ready and Moony and Danny are no different.”

When asked whether Cipriani would be included in the squad ahead of the Wales clash, Mitchell said: “Eddie will make the decision when we get back to England. Nothing is decided here [in Italy.]

“It is not for me to talk about selection. That is Eddie’s call, but we are going to need everyone and that doesn’t matter whether you are in now or out preparing.”

Following their match against Wales next weekend, England travel to Cardiff to face the Grand Slam champions before concluding their pre-World Cup schedule with fixtures against Ireland and Italy.

Their opening game with Wales could prove to be significant for players battling for places with England announcing their World Cup squad the very next day, but Mitchell insisted one match won’t have a major impact.

He added: “One game doesn’t determine selection. If you look, like I said, at all of these excellent players who are in and the ones who are out, we have seen enough of these people over a long period of time so one game is not going to determine their Rugby World Cup future.

“At the end of the day, this is part of the plan and we will have a strategy around that particular Test match. It is just one match of four which is all geared towards our key focus of preparing for Tonga, USA, Argentina and France.”