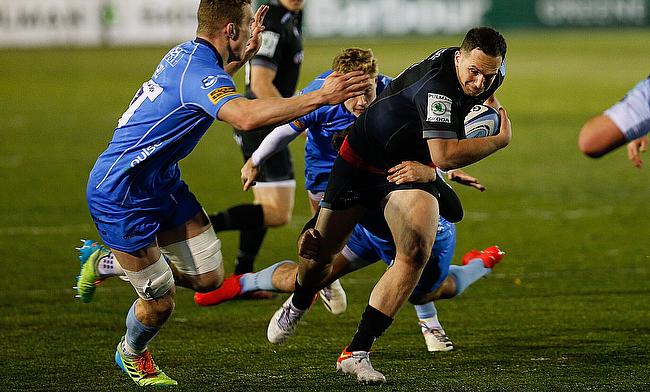 Pete Lucock was tucking into his Christmas dinner when Newcastle Falcons’ game against Sale Sharks at Kingston Park was called off.

An outbreak in the Sale camp meant that Alex Sanderson’s team were unable to play the game.

For Lucock, this meant that his wait for a start is lasting a little longer, the 29-year-old due to have started at inside centre in what would have been his first start since late November.

Awarded four points for the game’s cancellation, Newcastle currently sit eighth in the Premiership table, some 21 points adrift of their opponents this Sunday, Leicester.

Attention will firmly be on the current league leaders, the game coming just several days after an investigation into historic image rights payments made by the club to players was announced on Tuesday.

Merely six points away from fifth-placed Northampton Saints - who Falcons play next week - Lucock is more than aware of what a challenge this weekend will be for his teammates.

“It is a great challenge, isn’t it?” he said. “They are unbeaten in the league and in Europe, top of the league, and we can make a massive statement going there.

“I think it is a sell-out, a really good place to play rugby and it is a real good challenge for us and after this week’s training, I think we have put ourselves in really good stead.

“We play Northampton the week afterwards and a win could be the difference. We are looking forward to the rest of the year coming up.

“We have probably not played the best rugby we could have. I think that is exciting, especially with where we are in the table at the minute.”

Newcastle’s recent form in the Premiership has been good, but hardly perfect. Losing heavily to London Irish at the start of December, a draw to Worcester Warriors preceded that and at the start of November, Dean Richards’ men battled to a first ever win at Sandy Park by beating Exeter Chiefs 15-14.

In recent weeks, Newcastle were without first-string fly-halves Brett Connon and Joel Hodgson, Will Haydon-Wood getting the nod in the No. 10 jersey for a spell prior to last weekend when Connon’s return was announced.

Mark Wilson’s long-awaited return from injury was also due to take place, the squad’s depth only improving with each passing week.

Mike Brown will be making his 250th Premiership appearance on Sunday afternoon in a strong Falcons squad that is making the trip to the East Midlands. Lucock is not involved in the matchday 23, where Luther Burrell and Matias Orlando combine in the midfield.

Joel Hodgson and Louis Schreuder are the half-backs, as Mateo Carreras and Adam Radwan complete the backline.

In the pack, Adam Brocklebank, Charlie Maddison and Trevor Davison form the front-row, as Greg Peterson, Sean Robinson, Philip van der Walt, Will Welch and Carl Fearns are the back five.

Lucock’s move to Gosforth came after nine years graft in the Championship with Leeds Tykes and Doncaster Knights. Leeds-born, the centre was very much the model player to have come through the Yorkshire system as the first player to have gone from the Leeds Tykes mini-rugby group all the way to the first team.

His roots in ‘God’s own county’ will always be present. Whether that be his strong accent honed in northeast Leeds, having made 150 appearances for his hometown club, coaching Roundhegians RFC or stints at Wharfedale and Doncaster Knights.

Even as we speak, the 29-year-old is driving to his home in the county, another days training having drawn to a close not long before. Like so many players, when Yorkshire Carnegie was dissolved following financial mismanagement, Lucock was forced to move elsewhere in order to carry on playing professional rugby.

Soon after, the club’s academy licence was taken away, meaning that young stars from the county had to go elsewhere to pursue their rugby ambitions. Jack Metcalf and Joe Carpenter moved across the Pennines to play for Sale Sharks, whilst Dan Lancaster opted for a move to Leicester Tigers.

“It was tough to leave (Leeds Tykes), really tough,” Lucock said. “To have it forced on you rather than it be your decision, it was tough.

“I was happy there; it was a great bunch of lads. The club itself did so much for me, offered me so much. But it is probably one of those things, looking back on it, that if it hadn’t happened, I wouldn’t have the opportunity I have at Newcastle now.

“It (Yorkshire) needs a top flight rugby team. There are loads of really good teams, the pool is massive to choose from and it is just a shame the way it has gone.

“Doncaster are doing brilliant; they are investing a lot into their academy and stuff. The pool is massive.

“If you look at the players that have come from Yorkshire down the line, it would make a pretty impressive team if they all stayed together. It’s just a shame.”

Moving to Newcastle when the side was waiting for their return to the Premiership, Lucock finally got his first taste of first division rugby after the better part of a decade in the Championship.

“Newcastle was probably the most contact I’d had with a Premiership club,” he said. “When I was at Yorkshire and Leeds, we played them a lot and we had been doing training sessions against them, so I got to know the club and what they were about.

“When I played against them when I was at Doncaster (2019/20), I noticed the professionalism of them. They were great. They all knew they had a job to do and they all did it.

“The physicality was a step up to anything I had been involved with before, so I was really impressed with everything.

“I have always had interest (from Premiership clubs), but it has always come down to playing. I have always wanted to play; I have always enjoyed my rugby and they are the two biggest things for me.

“As soon as I lose that enjoyment and I am not playing, I will stop playing rugby because I have always played it for the enjoyment. I have always had chances to move, I just felt like when Newcastle came in, it was the right time for me to really just go for it and test myself.”