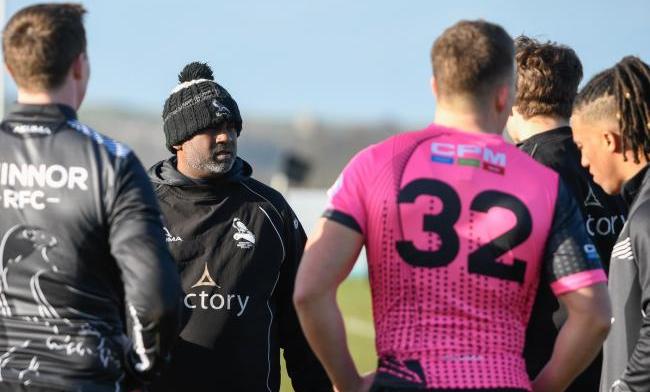 Joining Matt Williams at London Scottish in the Championship, Ricky Khan comes to the Athletic Ground with an impressive CV.

Having been an academy coach with Wasps for 13 years, he has also coached with Maidenhead, Berkshire, Jamaica Sevens, British Army Rugby League and, of course, Chinnor.

In the last two seasons alone, the top try scorers in National One have been coached by Khan with Rosslyn Park’s Craig Holland leading the way last year whilst Jason Worrall claimed the most scores in the third division in 2019/20.

Coming to London Scottish as the club transitions from a full-time to a part-time environment, Khan and DoR Williams are extremely familiar with this model. Having recruited strongly during their time in the National Leagues, they have already begun the same process at Scottish, securing the signings of several Premiership names as well as bringing some players from Chinnor into the second tier.

“Everyone knows that Matt and myself have worked together for a number of years at Chinnor,” Khan said. “With the part-time model, I wouldn’t say that we have got it cracked, but we have had a pretty good go at it in the sense of knowing what to expect and the expectations of players and the different challenges they might have in full-time jobs.

“On the flipside, we know that we have got to get results and if you look at the progress we had at Chinnor, over the last six years, every year we have improved. I think it is a really, really good fit. When Matt got the job, he messaged me and said we were going to Scottish. I didn’t have much of a choice. It was tongue in cheek, but we do dovetail quite well and have formed a partnership.”

Shaka is the only BAME coach in the Championship and has a Scottish great, great grandfather Menzies!
Read more on Ricky here?? https://t.co/6HNeXtyZl0 pic.twitter.com/GT0AeH3Pbf

As a player, Khan lined up for Blackburn RUFC and Preston Grasshoppers before an injury put a premature end to his playing days. Since then, the Lancastrian has devoted a lot of time to coaching and when it was announced he would be joining Scottish, it was also mentioned that Khan would become the only Black Asian Minority Ethnic (BAME) coach in Championship.

“I haven’t used it as a term, I have always seen myself as black,” Khan said. “Growing up, I was from a small town, so you were either black or white. Me and my sister were the only two black kids at school or in town on a Saturday night. We have just grown up with it. With everything going on at the minute, it came to the forefront for people.

“It is something that people haven’t really been aware of. It wasn’t a surprise to me. When you go to different coaching courses, anything like that, you do notice. When I did my Level 3, it was just me and Serge Betsen and he had come through the professional route. A lot of people have messaged me to say how hard I have worked, how I deserve it.

“A lot of people have felt that I have had to work a lot harder to get into some of the positions that I have done. On paper, I have been massively overlooked and told I need more experience. That has grated me a bit, but there are people like Matt Williams, John Lamden and Rob Smith who have given me opportunities and saw something in me.”

Having grown up in rugby league country, Khan has drawn a lot of inspiration from some of the games best known names and faces. Both Clive Sullivan and Ellery Hanley made history as the first ever black captain and head coach of teams in Great Britain and more recently, Khan has had influential figures in the world of rugby union reach out to him to offer their congratulations.

“The one thing that stood out for me was Paul Hull reaching out,” Khan said. “He is massively respected in Bristol and he is the only black guy to have been a head coach in the Premiership. It was really nice. I am on this group with quite a few high profile black, Asian and minority ethnic coaches. There are guys like James Bailey, who was with England Women’s Sevens, Warren Abrahams, they are on this group and there is some really good dialogue at the minute.

“It is about our responsibility, not to say ‘woe is me’ or anything. It is more about how we can use our position to speak to the press and encourage more ethnic minority players to go into coaching and support anyone if they want to.”

Out of the 12 current Premiership Rugby sides, only three can claim to have a BAME member of coaching staff amongst them. Khan remains unsurprised. Having been in the game long enough, hje recounts the interview for his RFU Level 4 coaching course, where he told interviewers of his desire to inspire young BAME coaches to follow their dreams and aspirations.

“I was there, chatting and I got asked about why I wanted to be a Level 4 coach and it was the usual answers,” Khan said. “I did also say that I wanted to be a role model and someone young black coaches can look up to. I mentioned guys like Paul Hull, Colin Osbourne and I said I looked up to them.

“I was still quite young at the time and they said they wanted me to do my Director of Rugby course and my mentor, at the time, said I shouldn’t have used the race card. I was gobsmacked. I was genuinely looking at it as a positive and to have someone say I used the ‘race card’, I was just disappointed.”

Yet to take charge of a coaching session for Scottish, Khan is keen to get a whistle back in hand, however, he has been able to resume his Jamaica duties recently, gathering the UK-based players to start their preparations ahead of an Americas North competition scheduled for later this year.