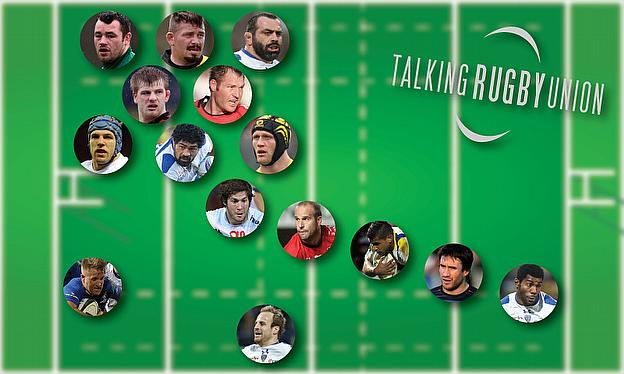 Clermont were simply glorious; Leinster were brutally efficient. Saracens were powerful and clutch, whilst Toulon, believe it or not, were a tad lucky.

We picked our XV of the Week from the four compelling European Rugby Champions Cup games, but do you agree?

1. Cian Healy, Leinster
Matt Mullan is unlucky to miss out after outscrummaging Carl Hayman for much of Wasps’ match with Toulon, but Healy was the key component in a dominant Leinster scrum at the Aviva Stadium. Kane Palma-Newport held up well against Healy initially, but as the game went on the Irish loosehead really found his groove and soon got the better of the matchup.

2. Ed Shervington, Wasps
The set-piece, an area Wasps had decided pre-match to try and play away from, actually turned into an area of strength for the English side and much of that had to do with the play of Shervington. He contributed to a scrum which quickly got the ball out when under pressure and was also on target with over 90% of his lineouts.

3. Davit Zirakashvili, Clermont
Alex Corbisiero has struggled to regain his 2013 British and Irish Lions form following a string of injuries since and a confrontation with the big Georgian on Saturday did nothing to help matters. Zirakashvili tore into Corbisiero right from the off, putting the Englishman under all kinds of pressure at scrum time and helped give Clermont a significant set-piece advantage.

4. George Kruis, Saracens
It wasn’t a spectacular performance from Kruis, but he did everything that was asked of him with great efficiency. He was Saracens’ favoured target at the lineout, was busy both with and without the ball and made a nuisance of himself at the breakdown, contributing to multiple won turnovers for the men from London.

5. Ali Williams, Toulon
Wasps fans will not be happy with this selection after his professional foul on Elliot Daly went unpunished, but the former All Black was in fine form at Stade Mayol. He led Toulon in lineout takes, was second only to Chris Masoe in carries and scored the try which sealed the victory for his side and saw them advance to a semi-final meeting with Leinster.

6. James Haskell, Wasps
Haskell turned in an industrious performance against Toulon, leading the game in tackles, as well as being an abrasive presence at the contact area, helping minimise the impact of the usually imperious Steffon Armitage. It was this contribution at the contact area which separated him from Clermont’s Damien Chouly, who also had a strong claim on this spot.

7. Julien Bonnaire, Clermont
Age doesn’t seem to affect Bonnaire like it does other players. The Frenchman was every bit as impactful at the set-piece and the breakdown as he was 10 years ago. He helped disrupt the Northampton lineout and was also on hand to slow down ball on the rare opportunities when Northampton were able to string together multiple phases.

8. Fritz Lee, Clermont
A powerful carrier, tireless tackler and efficient with ball in hand, Lee did everything that you would want of a modern number eight. Bath’s Leroy Houston and Leinster’s Jamie Heaslip both had solid games in Dublin, but neither could match the overall impact that Lee offered his team this weekend.

9. Maxime Machenaud, Racing Metro
In addition to being the only tryscorer in Paris, Machenaud also kicked six further points for Racing, as well as proving to be their most dangerous threat with ball in hand. The scrum-half hurt Saracens around the fringes with his sniping and always looked primed to spark a Racing foray in Saracens’ territory. Wasps’ Joe Simpson was also excellent and certainly deserves an honourable mention for his performance.

10. Frédéric Michalak, Toulon
One of rugby’s greatest ever enigmas, Michalak looked every inch the potential superstar that burst onto the international scene back at the 2003 Rugby World Cup. He contributed 22 of Toulon’s 32 points against Wasps, as well as playing with a reliability and composure that will surely madden every French coach who has failed to coax consistency out of his mercurial ability. George Ford went well in Dublin, creating havoc with ball in hand, but his tactical kicking suffered, much as it did in the same stadium a month previously.

11. Luke Fitzgerald, Leinster
Will Helu bagged a brace in Toulon and can consider himself unlucky to miss out, but Fitzgerald showed glimpses that he may be beginning to get back to somewhere close to his best. He was a threat on the wing for Leinster for the entire 80 minutes, despite rarely seeing the ball in opportune positions. Had the province’s back line had slightly better cohesion, Fitzgerald could easily have grabbed a try or two to cap his impressive display.

12. Wesley Fofana, Clermont
Philippe Saint-André must be flummoxed. In 80 minutes at the Stade Marcel-Michelin, Fofana made more metres, scored more tries and had more clean breaks than he did in his three Six Nations games combined. The inside centre was at his dangerous best on Saturday, looking every inch the world class midfielder we all thought he could be a few years ago. An honourable mention for Ian Madigan is also due, who kicked all 18 of Leinster’s points on their way to victory over Bath.

13. Marcelo Bosch, Saracens
There was plenty of competition from Elliot Daly and Jonathan Davies, but Bosch came through with a superb kick to send Saracens through to the semi-finals, as well as proving a handful throughout the game. The Argentine carried powerfully, always making ground, and was on hand to make a number of important tackles, including a try-saving cover tackle, which proved just a pivotal to the final result as his game-winning kick.

14. Noa Nakaitaci, Clermont
Similarly to Fofana, Saint-André will be wondering where Nakaitaci left this form during the Six Nations. The big winger rampaged down the flanks against Northampton, exploiting the position vacated by Saints’ own behemoth, George North. Nakaitaci capped his display with two tries, but it was his constant breaks and ability to power through tackles which really hurt Northampton.

15. Nick Abendanon, Clermont
Following the game in Dublin between Leinster and Bath, it looked as if Anthony Watson was a shoo-in for this spot. Watson was superb against Leinster, but the performance Abendanon put in at the Stade Marcel-Michelin was sublime. The former Bath man danced his way through Northampton’s defence with grace and guile and was impressive enough to garner plenty of calls for England selection.