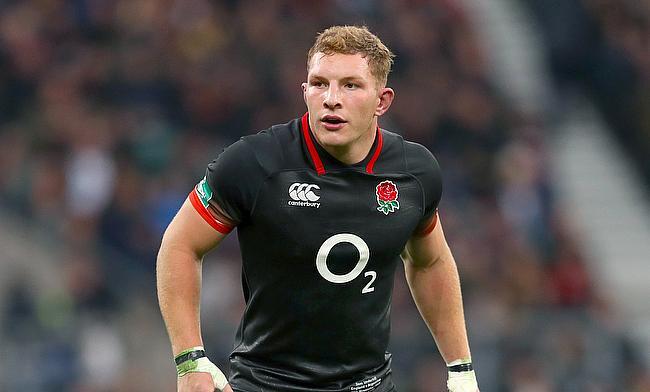 Sam Underhill made his England debut in 2017
©PA

Eddie Jones: Everyone wants to play beautiful rugby and we are no different
Benjamin Kayser: Law variations in the community game must only be temporary
England bring in Anthony Watson for Autumn Nations Cup final against France
Jersey connection between Callum Sheedy and Kieran Hardy could get Wales firing

On Sunday, 13 players that started in England’s World Cup final loss to South Africa will be once again aiming for silverware.

Yes, the Autumn Nations Cup may not have the prestige of a world title, but that doesn’t mean that Eddie Jones’ side are less interested in the prize on offer at Twickenham. To add some extra spice to the occasion, their opponents, France, are the only team to have beaten England all year.

Everyone will probably agree that February seems a long time ago when France’s 24-17 win in Paris compounded England's World Cup final defeat.

During the week that followed, a cloud descended over Jones and question marks were raised as to whether the England head coach was the correct man to guide the national side to the 2023 World Cup, but the pressures were lifted with a victory against Scotland.

Their triumph at Murrayfield was the beginning of a seven-match winning streak - which England are currently experiencing - and the recent Six Nations champions will renew their rivalry with France this weekend.

The French are rank outsiders on Sunday and it is clear to see why. Their starting XV contains just 68 caps between them compared to England’s quite staggering 813.

That said, captain Owen Farrell believes any criticism of their opponents is an opinion which is not held by anyone within the England squad.

“It probably comes as a surprise to them who has written them off, but that is not coming out of our camp,” Farrell said. “We’re expecting a tough game and it might allow them to raise their levels again, but at the same time, we want to make sure that we are at our best.

“We are expecting a tough, tough game and if they raise their levels even more so, it means we have, so it should be a good game.”

It is clear that France have used this Autumn Nations Cup as an opportunity to build some depth in their team. On one level, it is a shame fans will not get to see the likes of Antoine Dupont, Charles Ollivon and Virimi Vakatawa grace Twickenham, but on the other hand, it makes the performance of Fabien Galthie’s team all the more unpredictable.

“It is obviously a different side for them,” Sam Underhill added. "There are probably a few unknowns or players we know less about, but I think if anything, that probably makes them more dangerous and more of a threat and it is a different challenge for us. We need to be adaptable and be able to not expect too much because they are a dangerous side whoever is playing.

“They play good attacking rugby, they are a big physical team, so it is probably going to be the biggest challenge so far and on top of it, you have got the pressures of a final and all that brings.

“It is one to look forward to, but one we are acknowledging that we probably won’t know too much about what they are going to bring.”

The boss has spoken...

Eddie's thoughts ahead of England's meet with France on Sunday ?

When France last came to the capital, it was not a happy trip for them. England won the game 44-8 as they dominated what was then Jacques Brunel’s side.

Back in February 2019, Jonny May had a particularly enjoyable afternoon as he scored a hat-trick inside the first 30 minutes to put the result beyond doubt before the break.

“To be honest, I do find that the French games can be a bit more open,” May said. “They can be, but they have changed. I have just watched their game against Italy and they kicked the hell out of the ball.

“They have changed a lot so I am expecting them to come with a kicking mentality, but in the past when you play against a French team, they joue, don’t they? They get offloads going, they play off turnover, their game tends to be a bit faster and there just generally seems to be a little bit more unstructured play when you play against the French."

Under their new coaching staff, the changes that have been made by France are evident. The arrival of Shaun Edwards from Wales has tightened their defence significantly, adding plenty of intensity in the process.

They have even employed the services of a specialist kicking coach to help use that aspect of the game more effectively and there are clear signs that France are turning a corner, some 10 years after their last spell of domination in the northern hemisphere.

Whilst it is expected that England will win comfortably on Sunday, that is perhaps not the fairest way to assess their opponents. They are building in a much different way and they will be a threat again in two months time when England look to retain the Six Nations.