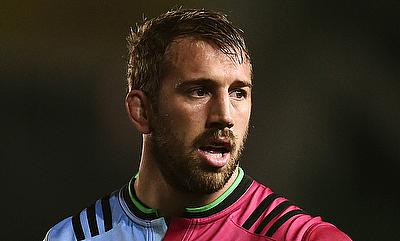 Chris Robshaw has signed a new contract with Harlequins
©PA

Robshaw led Quins from 2010-14 and has made over 200 appearances since graduating from the academy system at Twickenham Stoop.

"I'm honoured to have re-signed with Harlequins, a team I've supported my whole life," Robshaw said.

Robshaw's work-rate, commitment and leadership have made him indispensable at Harlequins.

The 29-year-old openside was at the helm for the Premiership title success of 2012, when Leicester were beaten 30-23 in the Twickenham final, and contributed a try in a man-of-the-match performance.

A two-time Premiership player of the year, Robshaw also lifted the Amlin Challenge Cup in 2011.

"I'm looking forward to seeing what the future holds for the club and I'm extremely excited to keep pushing for silverware with both Harlequins and England," Robshaw said.

"I would like to thank all of the supporters for their continued support and look forward to being with this great club in the years to come."

Only Will Carling has led England on more occasions, but Robshaw, who has 43 caps, has enjoyed a less prestigious international career than his fellow Harlequin.

There have been notable scalps including New Zealand, Australia, Wales and Ireland, but he has failed to lift any meaningful silverware, culminating in the hosts' inability to qualify for the knockout stage of the recent World Cup.

An ever-present under deposed head coach Stuart Lancaster, his position will be examined closely by the man the Rugby Football Union appoints as new England boss.

Harlequins director of rugby Conor O'Shea is an admirer of Robshaw as a man and player.

"Chris is everything you want in a rugby player and everything that you would want as a person. He has achieved incredible things in his career to date," O'Shea said.

"Chris is an exceptional ambassador and role model for the sport and deserves recognition for what he has done, and will continue to do, for this game. I'd like to thank him for his selfless dedication, humility and resilience."