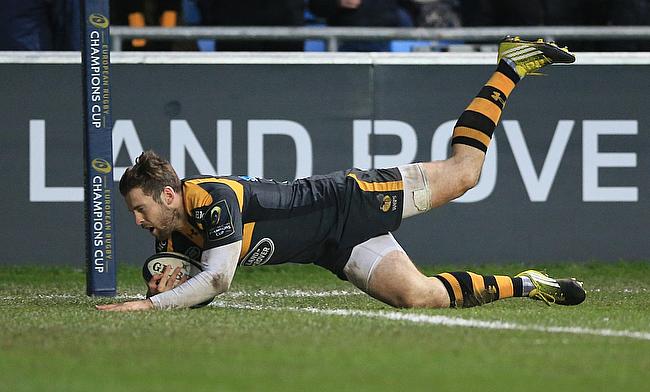 Elliot Daly pressed his claim to starting England's RBS 6 Nations opener against Scotland with an electric try as Wasps stormed into the Champions Cup quarter-finals with a 51-10 rout of Leinster.

Daly outpaced Rob and Dave Kearney in a race for the line after a well-drilled backs move forced an opening in midfield, plundering the score that swept Wasps out of sight in a bonus-point triumph that confirms them as Pool Five winners.

England gather at their Surrey training base on Sunday night when man of the match Daly will begin his quest to usurp Jonathan Joseph at outside centre for the trip to Murrayfield on February 7.

The 23-year-old also played a key role in the fifth try as Wasps enjoyed another spectacular afternoon in Europe to finish top of a pool that also includes reigning champions Toulon - who finish as runners-up - and Bath.

Leinster, three times winners of the northern hemisphere's richest club rugby prize, leaked seven tries at the Ricoh Arena as their dismal campaign concluded with them adrift at the bottom of the group.

To make matters worse, Ireland were given an injury scare ahead of their Six Nations match against Wales on February 7 when Johnny Sexton's afternoon was ended after only 10 minutes due to concussion.

Sexton was receiving treatment after being dazed and as the game continued around him, he rose to his feet and made another tackle. Once play stopped, Leinster's medic returned and the fly-half was helped from the pitch.

It is a worrying development as the 30-year-old, who had been named captain of his province for the first time in his 100th start, was stood down for three months until last February after sustaining four concussions in a year.

Wasps did not escape unscathed either as scrum-half Joe Simpson was carried from the pitch in the seventh minute, but England will have welcomed the return of James Haskell and Joe Launchbury from a shoulder injury and concussion respectively.

There was little sign of the carnage to come as Leinster crossed in the right corner after only two minutes, Luke Fitzgerald and Dave Kearney making the initial inroads before rapid hands sent Zane Kirchner over.

Sexton was wide with the conversion and once he had departed for a head injury assessment that ended his afternoon, Wasps sprang into life by pounding at the whitewash before Jimmy Gopperth darted through without needing a large overlap.

The Premiership club worked a short blindside to good effect for their second, George Smith and Dan Robson involved after breaking from a scrum with Launchbury taking the final pass.

An acrobatic inside pass by Kearney allowed Eoin Reddan to sneak in, but the three-times European champions slipped 15-10 behind on the stroke of half-time when Gopperth landed a penalty.

Gopperth kicked another three points and by the 47th minute Wasps were out of sight when Daly switched on the afterburners to race home from 40 metres out for a score that will have delighted England coach Jones.

Leinster were splintering and after waves of attacks their defence cracked for a fifth time with super hands from Daly sending wing Frank Halai over.

When full-back Charles Piutau displayed his pace to touch down with 10 minutes remaining the ordeal looked over for the Irish visitors, but Ashley Johnson stepped off the bench to inflict one final indignity.