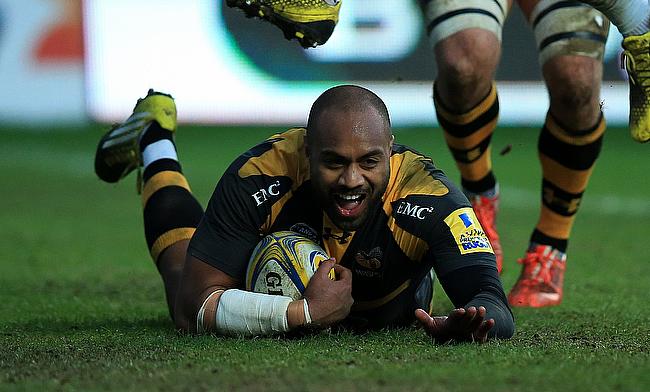 Late tries from Frank Halai and Sailosi Tagicakibau snatched both a win and a consolation bonus point away from Worcester as Wasps came from behind to win 32-22 at the Ricoh Arena.

Faultless kicking from Andy Symons threatened to cause a Warriors upset as he booted over five penalties and converted an interception try from Cooper Vuna.

Wasps were lethargic until the final 10 minutes but had still picked up tries from Kearnan Myall and replacement flanker Guy Thompson. However two late tries in quick succession from Halai and Tagicakibau not only secured the hosts a much-needed Premiership triumph, but a scarcely-deserved try bonus point to boot. Fly-half Jimmy Gopperth kicked two penalties and three conversions in the win.

However, Wasps will be concerned about Joe Launchbury, who twice left the field with a head injury and did not return after the second knock in the 67th minute.

Within the game's first two minutes, the Warriors had a suffered a huge blow when Sam Batty was forced off in a dazed condition after attempting a tackle on Sam Jones. Marco Mama replaced him but Worcester were forced to chase shadows in the opening period.

Gopperth and Joe Simpson both made clean breaks but poor passing prevented the home side from capitalising and a scrum penalty allowed Worcester to relieve the pressure before taking the lead with a Symons penalty.

Wasps then declined to kick two penalties in favour of more attacking options but it proved the wrong option as the visitors' defence held firm to keep their lead 3-0 at the end of the first quarter.

Worcester suffered a second injury setback when Biggs was helped off with an ankle injury to be replaced by Ben Howard, but they overcame this to double their lead with a second Symons penalty.

Worse was to follow for the hosts when an attempted pass from Daly was intercepted by Vuna, who returned the ball 50 metres unopposed to score the opening try, which Symons converted.

With only three minutes before half-time, Wasps finally got on the scoreboard when Gopperth kicked a penalty after Matt Cox was yellow carded for a high tackle.

Worcester made their third change at the interval when debutant Luke Baldwin replaced Mulchrone before Gopperth kicked his second penalty within five minutes of the restart to leave his side trailing only 13-6.

Cox returned from the sin-bin but he could not stop Wasps drawing level. Rob Miller made two excellent line-breaks, the second of which created a try for Myall, which Gopperth converted.

A third penalty from Symons put Warriors back in front, before two further penalties stretched the lead, despite the hosts starting to take control of proceedings.

Launchbury left the fray just before Thompson forced his way over with 10 minutes remaining and Gopperth's conversion set up a grandstand finish.

A long range penalty attempt from Daly fell just short but the late tries from Wasps' wingers crushed Worcester's spirit and got Wasps over the line.