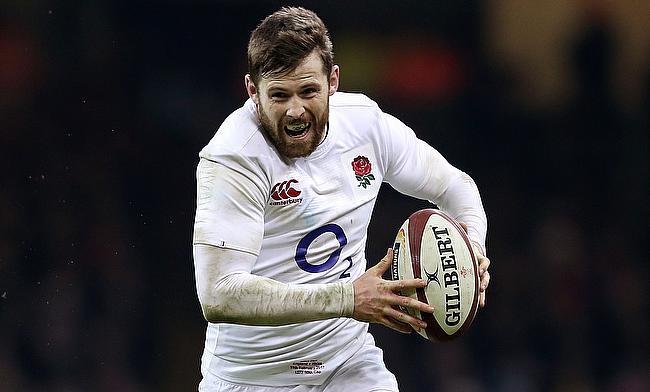 Worcester Warriors awarded win for cancelled game against Newcastle Falcons
England’s Jonny May: ‘We want to be a better team than the last time we played’
Dan Robson - We have got to make every minute and every moment count
Supporting the LGBTQ+ community in rugby: “It is about building knowledge, listening and understanding”

After making his debut against Ireland in 2016, Elliot Daly has become one of Eddie Jones’ key men in England colours.

Having been part of Stuart Lancaster’s 2015 Rugby World Cup training squad, it was clear from Daly’s consistently high performances for Wasps, that sooner or later he would be making the step up to international rugby.

Replacing Owen Farrell at inside centre for that first cap against Ireland, the question surrounding Daly was always to do with where he would play. At Wasps, the former Whitgift School pupil was ever present at outside centre, but as a youngster had lined up on the wing from time to time and at full-back, where he is now incumbent for his country.

However, in the Autumn of 2016 Daly’s burgeoning international career seemed to hit a bump in the road after he became just the second England player to ever be sent off at Twickenham, upending Argentine number eight Leonardo Senatore in just the fifth minute.

Banned for three weeks following that incident, Jones did not lose his faith in the versatile back and was ever-present in the 2017 Six Nations, where perhaps one of his career defining moments came agaisnt next weekend's opponents, Wales.

With some five minutes on the clock, and England losing 16-14 in front of 74,500 people in Cardiff, Jonathan Davies’s poor exit for Wales handed possession back to the English. George Ford charged over the halfway line, distributing the ball to Farrell on his left, who in turn passed out wide to Daly.

Escaping Alex Cuthbert’s attempt to stop him, Daly slid over in the corner to nudge England ahead. Following the conversion, it was the fans in white who flooded onto the streets of Cardiff after the final whistle who were much the happier.

Becoming a Lion later on that year, Daly is set to win his 50th cap for England this weekend as he and his teammates attempt to secure a fourth Six Nations title in six years. Always one of the first names on the team sheet, the Saracens man says that he is not likely to address his landmark appearance until after the tournament concludes in early Spring.

“To be fair, I haven’t really thought about it too much,” Daly said. “Something that I probably didn’t think I would get to when I was starting out, if that makes sense, when I was 23, 24 and not in the England fold and the people I played with were already 30, 40 caps for England. I thought it was going to be a hard task to get 50 caps.

“To be in and around that is amazing and I don’t think it will sink in until after the tournament for me, when I can actually really look at it, or at the end of the season, whenever it may be. It’s obviously an amazing achievement and I just want to try and go out there every time and do my family and my fiancé proud really.

“It is one that I haven’t thought about yet, but hopefully when the time arises, I can reflect on it and realise what an achievement it is.”

Spending so much of his early England career on the wing, where he also played whilst on tour with the British & Irish Lions tour of New Zealand, Daly believes that if it weren’t for that time spent in the 11 shirt, he would not have been able to become an established member of the England squad.

SQUAD UPDATE | @hazrandall9 has been forced to withdraw from the squad due to injury with @alexmitchell97 called up to replace him.

“When I wasn’t getting in (to the England team), I was a bit frustrated, but I think with Eddie coming in, it was brilliant for me because he gave me what I needed to work on to get into the team,” Daly said.

“So, I went away and did that and the wing experience, for me, was brilliant because I think as a player now, now I think I understand more of what everyone needs on the pitch. If I am playing centre, wing or full-back, I know what the other positions need in order to do their job to the best of their ability.

“As the time has gone on, I have really enjoyed the responsibility of leading the backfield, so whether that is in the week or on a game day, whenever it is, it is nice to have that title of running the backfield.

“There is a lot that goes into it, you probably don’t see a lot of it during the week, there are little conversations that have to be had to make sure that teams don’t pull us apart and stuff like that, but I have enjoyed every stage of it so far and hopefully it continues.”

So far this tournament, Daly has made the most meters for England and kicked for the most meters too. As a major part of England’s attack, Daly and his companions in the back three received very little service for the majority of their Calcutta Cup loss, although that did improve significantly once Owen Farrell was moved to inside centre for the Italy Test.

At the start of last week, Eddie Jones suggested that England were suffering from a 'drop in aggression' due to the absence of crowds, the Australian citing a study into Austrian Bundesliga team Red Bull Salzburg and how playing behind closed doors has affected them.

Reporting on games has been an unusual experience, with no crowds there to feed excitement or even use as a barometer to gauge how fans are feeling about their side. But for players, it is just a reality of their jobs now and Daly saying the owness is on he and his teammates to cope with not having supporters and loved ones in the stands.

“I think you are always going to get a buzz off 80,000 people in a stadium,” Daly said. “I think whether you are nervous, whether you are excited or whatever it may be, it is going to give you something extra that you won’t get when it is empty stands.