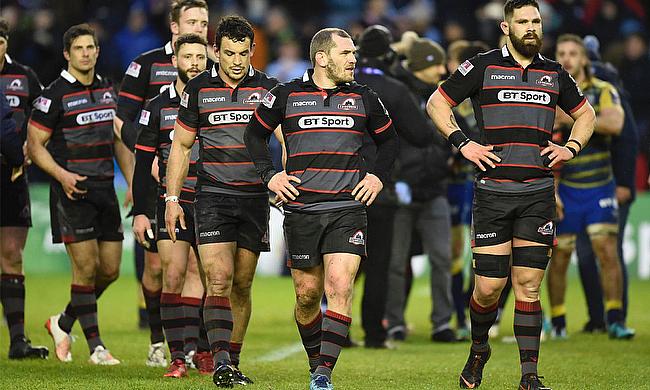 Edinburgh got an impressive win over Glasgow
©PA

Edinburgh secured the last remaining playoff spot in the Guinness Pro14 with an impressive win after chasing side Ulster could only muster a draw.

The Scottish side clinched third place in Conference B after an impressive 24-19 derby day victory over rivals Glasgow in the final round of matches. Meanwhile struggling Ulster, who needed to better Edinburgh’s result, could only draw away to Munster after throwing away a lead.

Edinburgh’s impressive final-day victory capped a fine end to the season for them, following up a 52-14 win at home to Scarlets in Round 20 although they gave Ulster some hope of snatching third place after a 32-20 home defeat to the northern Irish province. Ulster ultimately couldn’t catch them despite an 8-0 victory at home to Ospreys and the final-day draw with Munster.

Munster will have been glad to at least snatch a draw at home to round off a good few weeks in the league. They completed a successful tour of South Africa, hammering the Southern Kings 39-22 while narrowly defeating the Cheetahs 19-17. The other touring side were Cardiff Blues who lost out 29-27 to the Cheetahs but followed it up with a 45-12 victory over the Southern Kings. They couldn’t continue their good form on the final day though as Ospreys came down to town and left with a 26-23 win. Meanwhile the Cheetahs beat Southern Kings 29-20 to finish off a quite miserable season for the Kings while also securing their play-off place.

Elsewhere it was a worrying final match for Leinster as a weakened side suffered their heaviest loss since January 2016. Inspired by captain John Muldoon’s retirement Connacht triumped 47-10 over the Dublin side. That followed a 35-22 defeat to Glasgow and 39-10 loss to Ospreys in the previous rounds for Connacht. Leinster have bigger fish to fry with the small matter of a European Champions Cup final on the horizon but will have been disappointed at the manner of the defeat after 41-6 win over Zebre and equally surprising 17-15 loss at home to Benetton in the previous two rounds.

Benetton had been chasing Ulster following that surprise victory over Leinster and a 29-27 win at home to Dragons the previous week but lost 22-17 at home to Zebre in the final match. That made it two wins in two for Zebre who had beaten Dragons 34-32 the previous week. Dragons rounded off a fairly miserable few weeks with a home loss to Scarlets who came away with a comfortable 33-8 win.