Easter back a contender for England? 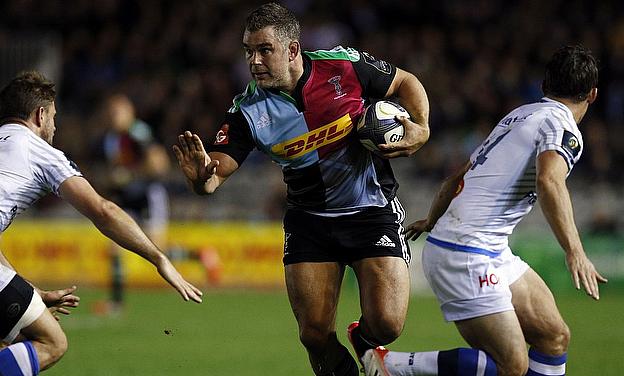 Nick Easter insists he has improved during his three-year international exile as support for his England recall gathers momentum.

An exact time frame for Morgan's recovery has yet to be outlined, but he is unlikely to play again this season in a setback that places his participation at the World Cup later this year in doubt.

While Vunipola fits England head coach Stuart Lancaster's preference for a powerful ball-carrier at number eight, the 22-year-old lost ground during the autumn after error-prone displays against New Zealand and South Africa saw him dropped from the squad.

One possible solution for the Six Nations opener against Wales in Cardiff on February 6 is Easter, who used the occasion of his 250th appearance for Harlequins to produce a man-of-the-match display against Leicester that revived calls for his Test return.

The 36-year-old won the last of his 47 caps at the 2011 World Cup, but his club form has been rewarded with a new two-year contract and offered hope that Lancaster may turn his gaze to Twickenham Stoop to replace Morgan.

"I think I am better than three years ago. I'm making miles better decisions and that comes with experience," Easter said.

"The body's in as good a shape as it has ever been. I've managed to look after it and I suppose I've been quite lucky."

Among those championing Easter's cause is Lawrence Dallaglio, who believes he has the "wise head" needed for the Millennium Stadium.

Quins director of rugby Conor O'Shea revealed after Saturday's 32-12 Aviva Premiership victory that Lancaster did not expect Easter to remain a force by the time England 2015 arrived, hence the absence of Red Rose contact since October 2012.

That belief has been challenged this season, not least with a telling contribution in three of his team's tries against the Tigers, and Easter insists he still has a role to play on the international stage.

"It did seem to be the case that I wouldn't be around for the World Cup, but I like to prove people wrong. Is England a driver? One hundred per cent. You always have that carrot.," Easter said.

"I spoke to Stuart about age when he told me I wouldn't be in his first Six Nations squad. I said that at the last few World Cups you had (older) players like Brad Thorn, Os du Randt and Neil Back.

"At the time he said he wanted to blood some guys, to find out about them. I thought that was a good thing to do, bring these new guys through.

"I'll carry on enjoying my rugby and it is up to the selectors. Sometimes your face fits, sometimes it doesn't."

Morgan's absence has also reignited the debate over whether England should enforce the 'exceptional circumstances' rule that will enable them to select Toulon's reigning European player of the year Steffon Armitage.

Armitage has been used with great success as a number eight by the French club and pressure is growing on Lancaster to call up the 29-year-old when he names his England squad on Wednesday week.