Lancaster will talk to Hartley 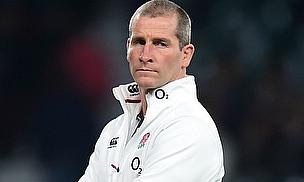 Hartley, 28, is currently serving a three-week suspension after elbowing Leicester's Matt Smith, the fifth ban of his career.

And Lancaster says that he will be talking to Hartley, capped 61 times for England, before the RBS 6 Nations begins.

"I have not spoken to Dylan," Lancaster said.

"I did not want to do anything until the disciplinary process was followed through, and obviously he has a ban to serve.

"He knows as much as anyone the importance of on-field discipline. He will have been disappointed in himself to put himself in that position. I will have a conversation with him."

Lancaster was speaking during a visit to Newcastle to officially unveil a World Cup 2015 sign on the Tyne Bridge.

He reflected on a testing year, but one which has helped him as England build towards the tournament they host in September and October.

After missing out on the 6 Nations title and losing to New Zealand and South Africa in the autumn, England bounced back to beat Australia and Samoa.

Lancaster says that although New Zealand will go into the tournament as justified favourites, the competition is extremely open.

"Every team is going to strive to win - if that's not your ambition, then there's something wrong," he said.

"I think the real strength of this World Cup in 2015 is the vast number of teams that can potentially win it.

"Obviously New Zealand are number one in the world and quite rightly so, but if you look across the board there are six, seven or eight teams that have the potential to win. That's what makes it such an exciting tournaments this time round."

Big decisions await for Lancaster, one of which will be whether he includes Bath's Sam Burgess in his final squad.

Following his arrival from rugby league, he has played at both centre and flanker and could feature for England Saxons against the Irish Wolfhounds on 30th January.

"We have two more Premiership games and two rounds of Europe to go before we name the squads.

"He has made a tremendous start in the sport. Everyone's expectations are probably too high in terms of expecting someone to learn the game straight away.

"But from what I have seen - I watched him the other night when he played for the A team, and I think he is doing really well. We need to give him time and make a decision near the time.

"We would certainly see him and trust Bath in terms of what they are doing with him, the way they are developing him. I have a meeting set up with [Bath coach] Mike Ford soon.

"Sam is learning the game, so we will see."