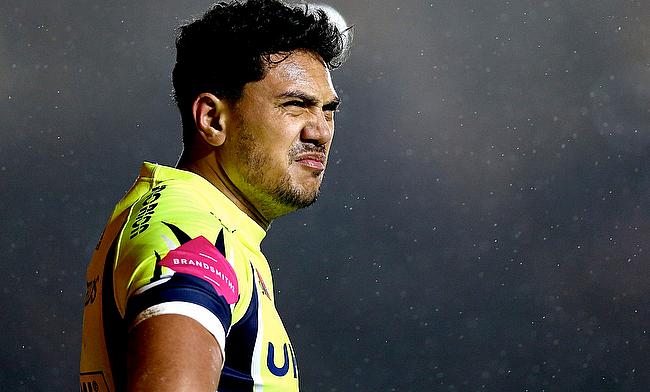 I want to let my rugby do talking - Denny Solomona
Dylan Hartley backs Tuilagi, Solomona to bounce back
Tuilagi and Solomona released from England training camp due to disciplinary reasons
Best and worst debut of my life - Denny Solomona

Sale Sharks Denny Solomona said he is looking forward to take on the European Champions Saracens when they travel to Allianz Park for the Aviva Premiership encounter on Saturday.

The Sharks started the season with a 50-35 defeat against Wasps following which they were edged out 12-13 in a tight game by Newcastle Falcons at AJ Bell Stadium. However, they bounced back with a 36-7 victory against London Irish last weekend and are positioned eighth in the table.

Solomona, who switched codes from rugby league in 2016 urged Sale Sharks to carry forward the momentum they obtained against London Irish in the upcoming clash against Mark McCall's side.

"The way we played against Irish is what we’re about. Dimes has said it and the boys have said it," said Solomona.

"Ultimately we want to win and that’s what will happen if we carry on playing like that."

Sale Sharks' only success in the English Premiership came during 2005/06 when they won the title and since then they have not even managed a spot in the top four but Solomona believes the team has a bright future with some promising talents.

“You want to test yourself against the best like Saracens. They know about playing in finals, they know that feeling about coming through a tight battle.

“All the boys are up for the challenge - that’s why you play the game. You want to challenge yourself and see where you end up.

“That’s the only way we’re going to improve as a team, getting involved in those tight battles and seeing what type of team we really are.

"As players we are all ambitious - that’s the reason why we play this game, to be winners. And we want to be successful.

"As a team we are improving too.We’ve got a lot of young players with enormous potential like the Curry twins - and they are showing every week that they are improving.

"We’ve also got a lot of new players in key positions but they have really bought into the team culture.

"We’re fine tuning our game-plan and we will be looking to execute it as well as we can."

Solomona has been in terrific try scoring form that saw him amass 11 of it in 15 games last season earning him a place in England's Test squad for tour of Argentina in June.Even in the ongoing season, the 6 ft 3 in winger has scored three tries from as many games.

The England international said his goal is to continue playing well with consistency and help his team win games.

“It was tough last year with back-to-back seasons having moved from league into union. Body wise and mentally it was draining,” Denny reflected.

“But Sale were really good to me over the summer, giving me six weeks off. And now I just feel really refreshed, both physically and mentally.

“Last year I set myself the goal of making the international squad and I achieved that. So this year my targets have changed.

“This season its about playing consistently and ensuring that I get the little things right.

“Obviously scoring tries is great but I’m working just as hard on things on and off the field and that’s my goal.

“As regards England, I’m not focusing too much about that. It’s one day at a time and one week at a time for me.

“I’m just focusing on the game at Sarries this weekend and trying to do my talking on the field.”