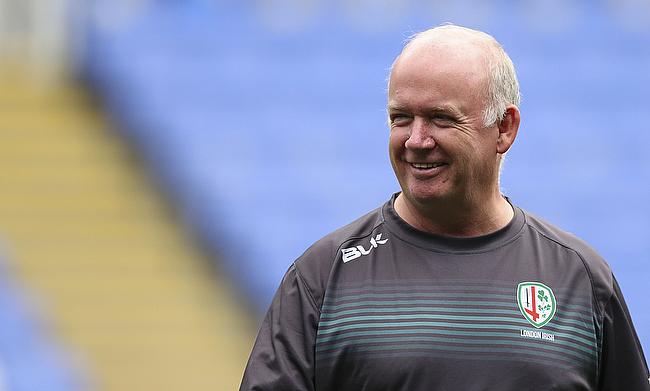 Maks van Dyk signed by Harlequins for remainder of 2019/20 season
Two positive cases in fifth round of Premiership's coronavirus testing
George Skivington: 'It's about working on what will drive Gloucester forward'
Adam Radwan pens new Newcastle Falcons deal at least until 2023

Declan Kidney was the mastermind behind one of the prevalent periods in Irish rugby.

Coaching his country to a Six Nations Grand Slam in 2009, Ireland's first since 1948, Kidney was pulled from a virtual exile to take charge of London Irish.

Arriving in 2017, the 60-year-old was unable to prevent his side from being relegated that season, but he was entrusted with the club’s development and establishment in the Premiership. Since then, Irish have returned to the top-flight and having brought in a raft of top tier international stars, including his former Leinster and Ireland player Sean O’Brien, Kidney’s side now find themselves in eighth spot ahead of the Gallagher Premiership restart.

Like many other teams in the Premiership, Irish have seen several comings and goings at their training ground in Sunbury-on-Thames. Perhaps the most notable signing is former Wallaby Rob Simmons, who will be joining after the completion of Super Rugby AU whilst Tom Homer, Charlton Kerr and Matt Cornish have linked up with the Exiles ahead of the Premiership restart. Meanwhile, Sebastian de Chaves and Ross Neal have been brought in on short-term deals.

For around a month now, professional players up and down the country have been readying themselves for their now imminent return to play. Building up slowly but surely to the breakneck speed of Premiership rugby, Kidney is preparing his side for six games in 23 days.

“I think there could well be opportunities coming forward, but we only want to give them to lads who deserve the jersey,” Kidney said. “You don’t want to be handing out games for the sake of giving a game for two reasons.

"One is it can devalue it if you just give a guy a game for the sake of giving him a game but also, you don’t want to be breaking any players by putting them in a situation where he is not mature enough to deal with it because that could set back his progression by a year or two.

?? | @wallabies centurion Rob Simmons will join the club after the completion of Super Rugby AU ??

?? "It seems to be an exciting time for the club, especially with the stadium move next season. I can’t wait to get going with London Irish."

"Anybody who plays would have deserved their opportunity. There will be some players expecting an opportunity that unfortunately might not get it because those ahead of them stayed fit. We just have to see how it pans out. I think the one certainty in life now is that there are no uncertainties.”

With star players littered across his team, Kidney has perhaps got the unenviable task of trying to get three squads ready each week whilst also resting players appropriately. Therefore, strength in depth is paramount and with recent events in the Premiership in terms of salary cap cuts and setbacks as a result of Covid-19, some teams are a little lighter.

“Obviously, I’ve been making out what teams may look like, but then you can come in any given day and the medics will tell you something totally different,” Kidney said. “When we do get to that phase of six games in the 23 days, it is going to challenge the depth of the squad and then, if you are lucky, you’ll sail through it and if you are unlucky, the nature of rugby, you always get your injuries in one position. They will never be spread evenly over the team.

“Again, like everything else in life, you should be able to adjust to it and not complain about it and moan. We have talked about adaptability and players being able to switch from position to position when the team needs it and not only have we talked about it, we have also practiced it.”

Irish have also been in the headlines recently. When George Skivington left Hazelwood to take up the head coach role at Gloucester, there has been some contention about how the move was handled. Irish believe that the approach was against Premiership regulations and a mediation process is ongoing around Skivington’s exit, but nonetheless, the 37-year-old has taken the reins at Kingsholm.

In terms of the rugby, Irish are just two points off a Heineken Champions Cup place and there is a strong chance that the side could welcome top level European rugby to their new stadium in Brentford next season. Playing the rest of their home games for 2019/20 at the Stoop, Kidney says that his team are treating this final stretch of the season as a tour as the Director of Rugby maintains that his side is still in a building phase.

“You are always trying to win each game as you go along, but you don’t think like that really when you are where we are now,” Kidney said. “I think we are still very much in a building phase. Our last turnout against Sale wasn’t too productive for us. I think we have got a long way to go in our approach.

“We will just compete each game and see where we end up. Each squad has changed as squad members have changed, so you have to adapt your team. Sometimes the bounce of a ball can decide whether you are supposed to be on the road to success or if you are going backwards.

“I think if we just have the core values of working to the best of our ability, backing one another up and everything that we do, then we have to see what side of the result that leaves us on the board at the end of each match and that takes us where it takes us. I know that sounds like clichés, but that’s exactly where we are right now.”