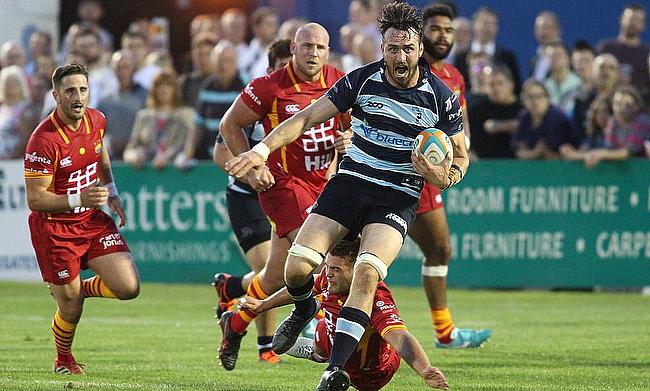 Sam Dickinson: A big chunk of my heart remains in Caldy
Rory Jennings: It is going to be unchartered territory next year
Robin Hislop: You could argue it’s a developmental tool for everyone
Looseheadz x Talking Rugby Union Podcast - John Hardie

The last two seasons of Daniel Temm’s rugby life have certainly been unique. From the demise of one of England’s most storied clubs, to funding cuts and a season ended by a disease, he has certainly been kept on his toes.

A self-confessed ‘late starter’ in professional rugby terms, it wasn’t until moving to Yorkshire from New Zealand that Temm’s skills were recognised.  An athletic flanker, he was spotted by Newcastle Falcons as an Otley player.

Originally coming to the country to play cricket, Temm joined Old Crossleyan’s in Halifax, prior to representing Otley. Professional for the first time in Newcastle, the back-row played over 20 times for Dean Richards, captaining the club’s Premiership 7s side.

Recognised by Simon Amor as a proficient sevens player, Temm then spent time on the World Series before joining Ealing and then back to Yorkshire to represent Carnegie. After a difficult start to the 2018/19 season at Headingley, where much was coming to fruition about the financial viability of the side, Temm and his teammates managed to string together 14 wins from their final 16 games.

“It was a complete rollercoaster year and although there was some really tough things happening off the field, it was one of those things that brought the squad a lot closer together,” Temm said. “I actually say the turn of the tide was just after Christmas when we all started putting £20 into a pot towards a social and we booked a full team trip to Magaluf.

“As soon as we had that trip in the diary, I don’t think we really lost a game. That was definitely really good and a good way to finish off what was a rollercoaster year.”

Temm was a number of players to receive invoices for payment from a clinic specialising in body scans. This added speculation that players and some staff hadn’t received their wages, with the club announcing that it would be going part-time.

Luckily for Temm, there was an early offer on the table from Bedford - where he now plays his rugby - but this could not be said for others. Many of the players had uprooted their lives, some coming from New Zealand to represent Carnegie in the Championship.

The Cornish Pirates can confirm the appointment of Chris Stirling as their Director of Rugby for 3 years, commencing on the 1st May.
Kiwi Chris joins from Yorkshire Carnegie.

Director of Rugby Chris Stirling was no different. Leaving Super Rugby franchise the Hurricanes to lead Carnegie to the Premiership, he was one of many displaced due to false promises but Stirling has too landed on his feet. He is now with Cornish Pirates and he also managed to bring several of his players down to the Mennaye to continue their careers in England.

“It is tough for those guys that moved their lives, left ITM contracts in New Zealand or left Super Rugby clubs because they were sold the dream,” Temm said. “It was so sad to move your partners, your dogs, your families all the way over to a place to be told six months later that there was no more work for you there and the pay is stopping.

“He (Chris Stirling) had been sold the dream as well, he left his job at the Hurricanes to come and head up, what he was told, would be a potential run to the Premiership. He was getting these guys over with the best intentions possible, because he was being told things from above him.

“Ultimately, bad leadership at the club from people that were running it led to what was happening. Hopefully it is something that people look around at so we don’t face it again because I don’t think there’s enough of an overwatch looking down on these clubs to make sure what they are doing is acting within the guidance of what they think is best and what they think is sustainable.”

Sustainability has been very much on the minds of many Championship clubs in recent months because in February, the RFU announced that they would be significantly reducing their funding.

As a result, London Scottish and Nottingham have confirmed that they will be going part-time next season. Citing concern over the use of the league as a developmental tool for future international players, Temm is one of many not to wholly agree with the RFU’s decision.

“To me, it was such a short sighted view,” Temm said. “So many English people have come through the Championship or learnt their trade there. Many academy guys are going down to Championship clubs to get a bit of game time in and between A-League and I think the Championship in its own way is a special kind of league.

“Although the Championship might not kick out the next England star in the next three years, I think the long-term view of not having a second tier competition that was fully professional is just so short sighted. A personal thing for me about English rugby is that I don’t know how well it picks up late bloomers.

“There are these schools that kick you into Premiership academies when you are 18-years-old and you go to the senior academy at 21. At the age of 21, they could be playing a person in National One who is playing better than them but they have had three to five years of Premiership academy guidance, so it is better to stick with them.”

Moving to Bedford in order to play a style of rugby that greatly compliments Temm, as well as potentially seeing the final years of his career at Goldington Road, the flanker is also planning for the future. For two winters now, the 29-year-old has been selling cashmere items of clothing to the public.

Having worked in the industry during his time at Otley, Temm set up the London Cashmere Company with his partner Julia. Flying out to Mongolia to secure a supply chain to the English capital, the products are largely sold online and at pop-up shops in the winter, with the driven Temm often manning the till himself.

“I been working at a pop-up shop in the morning and heading up to training, or on a Sunday after I have bust my nose up and people come in asking what I have done to my face,” Temm laughed. “So, I tell them the story about how I play rugby and this is to try and get something moving on the side. It has been a really great experience.

“This year just gone we ran five shops, four all at the same time in the build-up to Christmas. We had 14 part-time staff working across all the shops and trying to manage all of that and play a bit of rugby was challenging, but at the same time I truly believe it has helped me enjoy my rugby a lot more.

“Once I accepted that wasn’t the way I was heading (a regular Premiership player), I was able to be passionate about something else. It relieved a lot of pressure off my shoulders. Rugby gives you this privileged position which gives you full-time earnings but does provide you with windows where you can explore doing other things.

“If I could go back to my time at Newcastle now, I would have done a lot more. But it is so hard once you’re in that Premiership environment, you just want to be playing Premiership rugby and you want to be doing everything that you can to be doing that. In reality, if I could go back now, I probably would have gone on a lot better at Newcastle if I just had a bit of a diffuse and a bit of something different on those days off.”