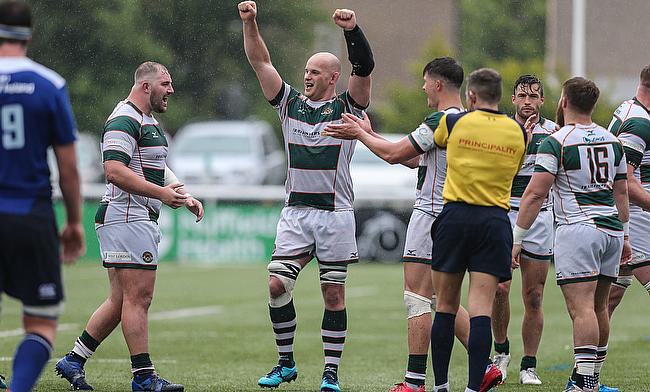 Rory Jennings: It is going to be unchartered territory next year
Robin Hislop: You could argue it’s a developmental tool for everyone
Watch: Will Hooley and Sam Leeming on the NHS Crossbar Challenge
Ethan Waller Column: Sandpaper, Self-Isolation and Life With No Rugby

Starting his senior career with Caldy, he was part of the side that hauled the team up to the National Leagues before Rotherham and Northampton came calling.

“There is potential for that,” Dickinson said when asked if he would ever return to the Wirral to finish his rugby career. “JJ (Dickinson's brother) is very much enjoying his rugby there and he says the setup is brilliant and the lads are brilliant too.

“A big chunk of my heart remains there and with him, of course. There is potential for me to go back there and see my career out with those guys, because there is a lot of great lads in that team, still a couple from when I was last there. It would be a nice way to finish up. Whether the body lets me, I don’t know, but we will find out I guess.”

In the professional era, there aren’t too many that have taken Dickinson’s path to the top of the game. Playing for Caldy for several years, his talents were identified by Championship side Rotherham in 2009 and the back-row and lock stayed  in South Yorkshire for three seasons prior to joining Northampton.

Clifton Lane has proven to be a good breeding ground over the years. Among former players to have represented the team are the likes of Gareth Steenson, David Strettle, Ross Batty and Juan Pablo Socino, all of whom went on to achieve international honours or become club stalwarts.

After signing with Saints, Dickinson would spend more time in the Championship, this time with Birmingham Moseley before establishing himself at Northampton, winning the Premiership, Challenge Cup and A-League title whilst at Franklin's Gardens.

“I got many years of the amateur vibe, semi-professional vibe and then progressed into professional stuff,” Dickinson said. “I guess you need some of those players in a team. I think you can tell who are the guys that came through the academy and have always been professional and the guys who have always done it for the love of the game and have been fortunate to push on.”

“It is a lot better standard of rugby than what you get in the A-League, it’s a lot more physical. It is men’s rugby. That’s why Premiership teams love to send people into the Championship, to earn their stripes and weather the storm, so that they are not just playing on Monday nights and playing pretty rugby.

“They (the RFU) either don’t understand the system or they are not being truthful and why they might not be being truthful, I don’t know. It feels like yanking the legs from underneath you rugby-wise as a nation. They will still take the cream of the crop, they will still take the best players, but they are not going to contribute as much, or anywhere near, to actually helping the system.”

Having represented three sides in the Championship, it is only his current team that are still in the second tier. Rotherham now find themselves in National Two North and Birmingham Moseley in National One, with Ealing now on the competitions' leading clubs.

“I think a lot of those teams would have been perfectly honest and said ‘yes, we needed that money to support ourselves and the players’,” Dickinson said. "It’s true Ealing probably have enough money not to worry about it, even though it may strain them here or there.

“It is going to create a huge divide between those few teams who can keep themselves afloat and those who will have to go completely part-time and they will become a sub-division of fully professional teams and the peak of the National League teams.”

Rising through the leagues over the past 10 years, Ealing have finished in the top three for the last four seasons. Placing second in three of those campaigns, many have begun to wonder if the Londoners are ever going to make the leap to the Premiership.

“I don’t think they’re too far at all,” Dickinson said. "It has been a strange few years for Ealing. When I came in it was the transition of one coach leaving and another coming in to replace him and not making the right decision. We handicapped ourselves a little bit by doing that, we lost continuity, the goal remained the same. We just stunted where we were.

“Whilst we played some great rugby, it took us a while to get there after those transitions. It only takes one loss against one of the top sides to shoot yourself in the foot. This year against Saracens, they’re going to be hugely competitive, but going from this season to the next one, the one thing that will be huge will be the continuity of players.

“The setup is there, everything is there infrastructure wise, coaching wise there is great detail and they are growing with wisdom each year. Just getting that exact year correct is just what we need.”