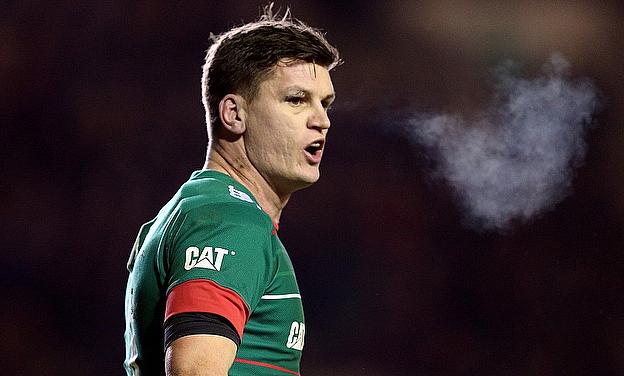 Leicester moved up to sixth spot in the Premiership with an unconvincing 12-6 win over London Irish in a dreadful game at the Madejski Stadium.

It was an error-ridden contest dominated by penalties and scrums with neither side remotely threatening the try-line.

For Leicester, Freddie Burns kicked two penalties and dropped a goal before leaving the field at half-time. His replacement David Mele kicked a second-half penalty with Shane Geraghty kicking two penalties for the Irish.

Leicester were marginally the better side but they could not take advantage of a yellow card for Geoff Cross and have not scored a Premiership try since Tom Youngs crossed against Bath on January 4.

London Irish made two changes from last week's impressive effort at Northampton. Prop, Halani Aulika, was ruled out through injury but Irish were able to call up Cross, who had been released from the Scottish squad.

Fergus Mulchrone was a late withdrawal so Tom Fowlie was switched to centre with Alex Lewington coming in on the wing.

Jordan Crane was selected to captain Leicester on his 200th appearance for the club. Tom Youngs and Tom Croft were also in the starting line-up after being on the replacement bench for last week's England win over Italy.

Jack Roberts made his first Premiership start in the centre with Miles Benjamin being recalled on the wing.

A scrum offence by Irish gave Burns the chance to open the scoring and he made no mistake with an excellent kick. Moments later for a similar infringement, Burns had almost exactly the same kick but this time his effort sailed wide.

Leicester dominated the opening period and two clever kicks from Burns secured his side a platform in the home 22, from which the outside half dropped a goal to extend the lead.

Irish struggled to get a foothold in the match but Leicester could not take advantage as Roberts made too basic handling errors and it remained 6-0 to the visitors at the end of the first quarter.

Another scrum penalty saw Burns again on target before Irish suffered another blow when Topsy Ojo was forced to leave the field with an injury to be replaced by Eoin Griffin.

After 29 minutes, Irish had their first real chance for points and they succeeded when Geraghty kicked a penalty but the home side continued to have problems with their scrum.

As a result, Cross was sin-binned by referee, Wayne Barnes, but Burns could not capitalise as he missed the resulting penalty and another long-distance effort to leave Leicester 9-3 ahead at the interval.

Burns was replaced at half-time by scrum half, Mele, which caused severe disruption to the Tigers as he and Sam Harrison alternated in the fly-half berth but despite this, they were still the better side in the early minutes of the second half.

Leicester brought on the experienced Seremaia Bai in place of Roberts but back to 15 men; it was Irish who picked up the next score with a second penalty from Geraghty.

Mele nullified this with one for the visitors to enable them to lead 12-6 at the end of the third quarter.

Irish threatened to cause an upset by dominating the final 10 minutes but Tigers' defence held firm to secure four valuable league points in the race for the play-off spots.