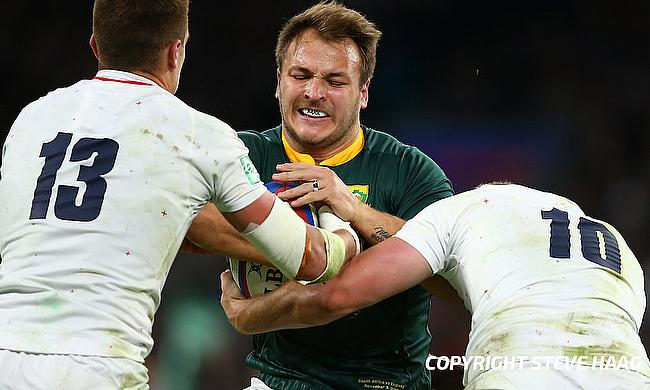 South Africa international Andre Esterhuizen is set to make his debut in the Premiership next season after he was signed by Harlequins.

Esterhuizen made his professional rugby debut with Sharks XV in 2013 with his Currie Cup and Super Rugby debut coming a year later. The 25-year-old has made 72 Super Rugby appearances and was part of the South Africa Under 20 side that competed in the 2014 IRB Junior World Championship.

“When the opportunity to play for Harlequins came up, I knew it was the right move for me to develop my career and get the chance to play in the Premiership, as well as experience the European competition, which have always been dreams of mine," he told the official website of the club.

“Paul Gustard and his team are building something special there and to have the chance to work with a young and dynamic coaching group such as Nick Evans and Sean Long is really exciting and I can’t wait to run out at The Stoop and show them what I can bring to the team.”

Esterhuizen made his Test debut for the Springboks in June 2018 against Wales and has gone to play eight games at the international level with his last appearance coming during the Rugby Championship last year. He also featured for Barbarians last year during games against Wales and Fiji.

“André is an incredible signing for Harlequins. He is a current Springbok who has the ability to change any game through his raw power and strength in the contact areas," said Harlequins head of rugby Paul Gustard.

"His physical abilities are impressive enough, but we were further attracted by his capacity to be a second playmaker, distributing before and through the line. He is a fantastic talent and his addition to our squad is very exciting.

“Besides his ability on the field, which are without debate, he is a tremendous human being. He has the character that we want and at 25 is entering his prime as a player.

"He will join a back line that we feel can grow together and develop into an elite unit with the likes of Langy, March, Marcus, Gabs and Cadan amongst others whom we foresee and want to be at the Club for a long time, developing a deep understanding of each other and build strong friendships.

"We look forward to welcoming André and his young family to the Club as he embarks on a new journey in his career.”