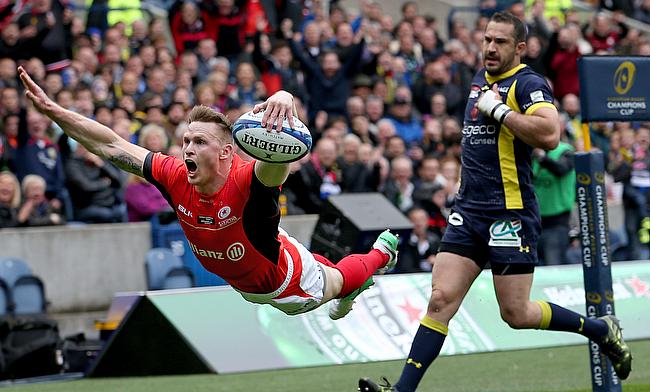 Ashton has joined the Midlands club with immediate effect on a contract to the end of the 2021/22 season.

His arrival at Sixways could not be better timed as full-back Melani Nanai has been ruled out for the rest of the season due to a torn hamstring whilst promising wing Noah Heward is also sidelined.

In addition to increasing options in the back three, Ashton will also help to mentor the club’s less experienced players in those positions and be a role model for the whole squad.

“We are pleased to welcome Chris to Sixways. He is a quality, proven international, who is equally at home at wing or full-back,” said Warriors Director of Rugby Alan Solomons.

“With Melani out for the season and Noah’s return being further delayed, the timing could not have been better.

“Chris is the consummate professional and will be a good role model for our younger players. I have no doubt that Chris will make his mark here at Sixways.”

He is third on the Premiership’s all-time list of try-scorers with 88, two behind Mark Cueto and just four short of equalling Tom Varndell’s record.

Ashton’s move to Warriors will reunite him with new Head Coach Jonathan Thomas who was part of the Barbarians coaching team when the famous invitation club inflicted a record 63-45 defeat on an England XV at Twickenham in 2018, a match in which Ashton scored a hat-trick of tries.

“During that week with the Barbarians I enjoyed working with Chris and it gave me the opportunity to see what an outstanding professional he is,” said Thomas.

“We have a few injuries in the back three at the moment so to be able to bring in a player of Chris’s calibre at this stage of the season is a huge boost for us.

“We have created a lot of opportunities in attack this season but haven’t quite been able to finish those off. Chris has a proven record as a prolific try-scorer at this level so having someone who can be clinical in those critical moments in games is important.

“As a club, we have made a commitment to develop our homegrown youngsters and we have a very talented group coming through. But to accelerate their development, they need to see what good looks like and how international players communicate, prepare and conduct themselves.

“Chris is going to be of huge benefit in improving our young players. Not just the back three players, but all the players in the squad.”

Having started his career in rugby league with Wigan and been capped by England in the 13-a-side code, Ashton successfully transitioned to union when he joined Northampton Saints in 2007.

Ashton scored 39 tries in 25 appearances in his first season at Franklin’s Gardens which helped Northampton romp to the Championship (then National One) title.

He was joint leading try-scorer in the 2011 Rugby World Cup, joined Saracens in 2012 and had a season with Toulon in the Top 14 in 2017/18 before returning to the Premiership with Sale Sharks. He joined Harlequins last March/

“I would like to thank Harlequins for agreeing to release me early from my contract to be able to join Worcester Warriors,” Ashton said.

“The ability to continue my career in the Gallagher Premiership and play regular rugby means that this move is right for me and my family at this time.”

As Worcester said in their press release, the signing of Chris Ashton works not only in the short-term but also long-term. With Melani Nanai injured and Noah Heward having continued issues with his hamstring, Ashton can cover for Warriors on the wing and in the 15 shirt.

Having not received the game time at The Stoop he would have liked, Ashton will be adding his wealth of experience to a settled Warriors side that sits 11th in the Premiership table. That experience lends itself even further to the young players Alan Solomons and his staff are hoping to nurture in order to sustain the club for years to come.

For example, when Heward returns from injury, he will be able to bend the ear of a player who has done it all. In recent weeks, Worcester have made some wonderful moves, having brought in Mark Jones as a senior assistant coach and have promoted Jonathan Thomas to head coach. Adding winger Duhan van der Merwe and bringing in Ashton falls under that bracket.

Worcester have a very clear direction at this point in time and Solomons is laying the foundations of what he and the clubs owners will hope is going to help march the side up the table. Local lads Ted Hill and Will Butler are captain and vice-captain respectively, and Academy product Ollie Lawrence is flying the flag for Warriors in an England shirt.