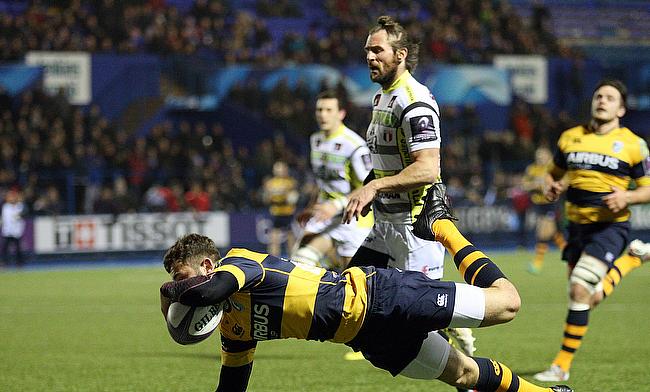 Cardiff Blues managed to overcome a sin-bin to Kirby Myhill in the 73rd minute as they went on to beat Dragons 17-22 in their Pro 14 encounter at Newport on Tuesday.

The Blues suffered a setback early in the game when Bradley Thyer was sin-binned in the 14th minute but the Dragons failed to capitalise on the advantage.

The deadlock finally came to an end in the 27th minute when Gareth Anscombe kicked a penalty goal and eight minutes later
Aled Summerhill crossed over to put the visitors eight points clear.

Gavin Henson with his 39th minute penalty goal as Dragons brought down the gap to five points at the end of the first half.

After the break, a well-worked move gave Rey Lee-Lo a simplerun-in from ten metres as a gap between Henson and wing Pat Howard opened wide,Anscombe converting. The home side were desperate for points in order to get back into the game but a 38-metre penalty from Henson went wide.

The Blues tightened their grip on the match on the hour mark when full-back Matthew Morgan fed James on the home 22 for their side's third try which Anscombe converted.

The scoreline was 3-22 in favour of the Blues when the final quarter kicked-off and this is when Lloyd Fairbrother went past the line and Henson converted to bring the gap down to 12 points.

The Dragons' comeback was aided when the Blues were reduced to 14 men in the final seven minutes when Myhill was sin-binned for collapsing a drive and to make things worse penalty try was awarded to the Dragons with the difference coming down to five points.

From 19 points up, the Blues were now just five points ahead but the Dragons' late surge could not be maintained as they suffered another defeat to the Welsh capital city region.