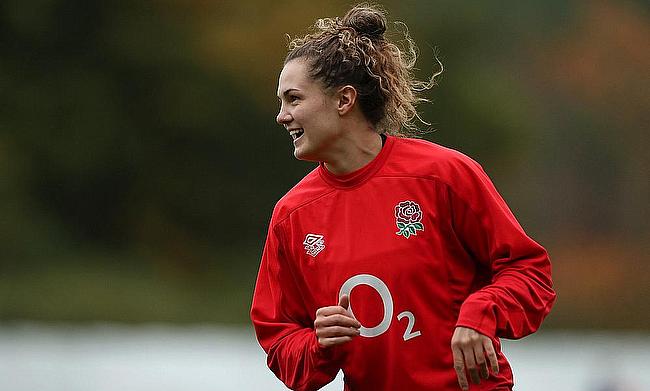 Rugby World Cup 2021 scheduled unveiled
Exclusive: Amber Reed - 'We’re going to stand up for what we believe in to inspire the next generation'
Charlie Beckett Column: Why #ICare
Rachael Burford Exclusive: Postponement of Women’s Six Nations presents window of opportunity

After a difficult year for England’s Sevens stars, with contracts cut, new jobs sourced and considerable uncertainty and worry, the news that National Lottery funding will enable two Great Britain teams to go for gold at the Tokyo Olympics would have been a most welcome announcement.

Given the messaging out of Japan in the last few days, it appears that one of the grandest sporting spectacles remains on its rearranged schedule, somehow, providing a degree of clarity for the athletes involved.

There was further good news for some of the female players who may have double glory on their mind last week when Nicky Ponsford, the RFU’s Head of Women’s Performance, confirmed to the BBC that England players would be able to try for both the Olympic Sevens squad and England’s World Cup squad to travel to New Zealand for the World Cup.

Ponsford was keen to stress that only a “limited number” would take on what would be a significant challenge “both mentally and physically." Across the Severn, Jasmine Joyce has already signalled her intention to back up a likely place in the Great British squad for the Olympics with a trip to the World Cup with Wales.

The RFU, @Scotlandteam and @WelshRugbyUnion confirm they have secured funding for GB Sevens teams for the 2021 season ahead of the @Olympics and @WorldRugby7s.

Joyce was the only Welsh representative to travel in an otherwise entirely English playing group to the Rio Olympics, but the 24-player squad that was named in February of last year - to be narrowed to an eventual 13 - also included compatriots Keira Bevan and Hannah Jones, as well as Scottish sextet Rhona Lloyd, Chloe Rollie, Helen Nelson, Lisa Thomson, Hannah Smith and Megan Gaffney, who will be well known to Scotland 7s Head Coach Scott Forrest, who assumes a similar role for the Great British women.

Yet just as in Rio, Forrest will draw heavily from the English squad members as Team GB target a medal, should he be able to call upon all of them. That is now no certainty – the positive autumns enjoyed by the likes of Ellie Kildunne and Helena Rowland mean they may now be fully required by Simon Middleton and the Red Roses.

It is unlikely that any of Emily Scarratt, Jess Breach, Sarah McKenna, Vicky Fleetwood or Natasha Hunt, all of whom were part of James Bailey’s England side at the 2018 Rugby World Cup Sevens in San Francisco, will move back to sevens to bolster the squad in that manner.

Rowland could be the figure of most fascination, though. The Loughborough Lightning fly-half could miss out based on her importance to England where she is a leading contender to take the vital berth after Katy Daly-Mclean’s retirement – would Middleton be willing to part with potentially one of his most crucial players six weeks before a World Cup?

Thus, Rowland may not be part of a tilt at Tokyo gold by dint of her quick success back in the 15-a-side game after an opportunity that might not have come her way had Covid-19 not emerged (though playing a key role at a World Cup is a rather significant carrot).

Both players and coaches have repeatedly discussed the impact that the returning sevens players have had on both the Premier 15s and for the Red Roses in the autumn.

“Having them in training has definitely upped the pace and standard,” Daley-Mclean reflected after what turned out to be her final appearance for England against France last year. “Especially in the backline, some of our unit training has been great because they have been involved in it.”

Middleton meanwhile picked out both the “high quality” of Alex Matthews, Rowland and Kildunne, but also how vital the manner in which players like Holly Aitchison and Abbie Brown came into and supported the Red Roses squad during the course of the autumn was, particularly when confronted with a significant injury list.

"Entering 2021, who succeeds Katy Daley-Mclean is by far the Red Roses’ biggest question to answer."

The duel between @zoeharrison123 & @HelenaRowland99 for the No.10 shirt will be a battle worth watching in a World Cup year.

“It has added fantastic quality. It is tough for the sevens at the moment, but what it does is return a lot of players to 15s, and it gives 15s a real high quality both in terms of international and the Allianz Premier 15s,” Middleton added.

This is not a surprise. Those with sevens experience consistently elevate squads, able to cover multiple spots and provide readily apparent value with well-rounded games.

It can be seen in the refinement of their core skills, honed in the cut and thrust of high-intensity, high-quality international battles on the sevens series. It can be seen in the manner in which they are willing to back themselves in space or to push through extreme fatigue to make quick, correct decisions in high-pressure moments.

Would Rowland have developed into such a naturally devastating threat at fly-half without her sevens experience?

It seems strange then, given the considerable quality in the squad, that England’s women’s record has been relatively patchy since the women’s Sevens Series’ inception in 2012.

Second place in the inaugural edition in 2012-13 is their sole top-three finish, yet women’s rugby in England has benefitted from sevens in other ways.

The England Sevens team has afforded women vital opportunities as the game begins to move at a greater pace towards full professionalism. As Bailey pointed out in November, of the 15 backs in Middleton’s squad for that clash with France, all but three had been part of the sevens programme. Middleton himself initially took on a joint role in both sevens and fifteens before focusing fully on Red Roses duties after guiding Team GB to fourth place at the Rio Olympics.

If England Women win the World Cup, the opportunities afforded to some in sevens will be a driving factor. Concerted interest and investment in a well-structured sevens set-up opens pathways and accelerates the development of players. It has been greatly to the benefit of this Red Roses side. The RFU would be wise not to forget that.