Can Blair be the King in Dublin? The talking points for Scottish fans ahead of ‘Super Saturday’ 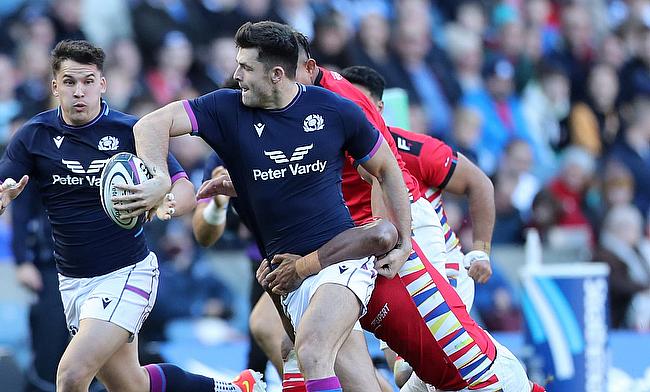 Everyone in Scottish rugby circles has talked about the ‘Toony Tombola’ since Gregor Townsend took over as head coach a few years ago.

He loves to throw a curveball in there and he did so yesterday by naming Blair Kinghorn at stand-off with Finn Russell on the bench for the last Six Nations game in Ireland this Saturday.

Only one of British & Irish Lion Russell’s previous 62 caps have come as a replacement and although he has not been at his world class best in the first four rounds of action in the event he is still a matchwinner on his day.

Kinghorn, 25, has earned the majority of his 30 caps to date on the wing and has been seen as a back three player over recent years at Edinburgh Rugby.

However, he played at stand-off at age-grade level and since last summer there has been a real change in the rhetoric around him.

Former Edinburgh head coach Richard Cockerill did not want to entertain the idea of Kinghorn at 10, but his successor Mike Blair has talked up the player in that position to the press at every opportunity and has picked him there regularly ahead of Jaco van der Walt.

And earlier this month Blair said:  “I believe that Blair is a potential world class 10 but I also believe it is going to take him a little bit of time to get there.

Your Scotland team for Saturday’s @SixNationsRugby game against @IrishRugby has been confirmed.

“However, as he is getting there, he can excel in his performances so he can be a very, very good 10 as he goes through this transition.

“I do believe there is a world class ten in him. We’ve just got to give him time, back him, let him grow in that position and let him really grasp that opportunity. It is up to him to do that as he will get the opportunities.”

Townsend is on the same wavelength as Blair and even though Kinghorn missed last week’s win in Rome due to personal reasons he is back in the 23 and has been given his big chance to impress.

His only previous starting run out in the pivotal position was against Tonga in the Autumn at BT Murrayfield, but this will be a different kettle of fish away from home and with the likes of Caelan Doris, Josh van der Flier and Jack Conan charging at him.

When asked why Russell had been dropped on Thursday, Townsend said:  “I prefer to focus on what Blair has done and how well he's played. He has deserved this opportunity with his performances throughout the season.

"He's been in really good form. He wasn't available for our match last week, but the week before that he played his best game of the season against Connacht.

"He's come on twice off the bench and shown what he can do in that Scotland 10 jersey. He started against Tonga and played really well and he's built on that performance so we believe this is the right time and the right game for him to play in.”

Townsend said that Russell was “initially disappointed” when told of his omission, but will “support the team and Blair”.

Just where is this team at?

Scotland are at number seven in the world and during 2021 put in good performances to win away in England and France and then they beat Australia at home in the Autumn.

As a result, the squad went into the Six Nations with confidence and the win in round on against England helped that despite it not being a vintage performance.

Agree 100 percent - it is a big call and a bold one which may not work, but BK is a very good player and Gregor Townsend and Mike Blair haven't just moved him to 10 on a whim, people really need to think about their responses a bit more carefully when team lines come out https://t.co/ujzM9gpvdM

Since then losses to Wales and France as well as a poor last 20 minutes in Italy have left supporters scratching their head. There is no doubt winning in Dublin will be very tough, but a good performance is needed from Scotland to show that they are still building positive in the lead up to Rugby World Cup 2023.

When Steve Tandy came in as defence coach after Rugby World Cup 2019 he made an instant impact, putting outside centre Chris Harris in place as a defensive leader and building from there.

During those two calendar years the Scots became frugal and hard to score against which allowed them to build up their attacking game. This year, however, things seem to have regressed defensively and in four games in this tournament they have conceded 95 points.

Perhaps more worrying has been the high penalty count and that really will have to tighten up in Dublin if they are to have any hope of holding on to Ireland’s coattails.

Can Darge and Watson slow up the Ireland attack?

The Irish attack is looking pretty razor sharp especially with James Lowe now back on the wing.

Indeed, with him, the returning Mack Hansen and Hugo Keenan in the back three they will be looking to cause Scotland as many problems as possible, especially as their team need a bonus point via four tries.

???THE INSIDE STORY OF HOW DETERMINED AND DILIGENT DARGE MADE IT TO THE BIG TIME

In recent months, @rory_darge has taken the rugby world by storm.@G_HMedia spoke to the Scotland back-row's mother, as well as former coaches about his rise to Test rugby??https://t.co/I58oy6h9Jl pic.twitter.com/i4yKD1FrqE

Scotland somehow have to stop the in-form Jamison Gibson Park getting quick ball away at ruck time and their only hope of doing that is if numbers six and seven - Rory Darge and Hamish Watson - are at the top of their respective games.

In their first Test appearance together last week there were positive signs, but Italy are no Ireland and they will be prepared for a dogfight at the breakdown.

How good can Pierre Schoeman become?

The 27-year-old Edinburgh loosehead prop has been a revelation in his eight caps to date. The South African-born player earned his first cap in the Autumn against Tonga and has really brought something new to the Scotland pack.

He has benefitted from previous first choice loosehead Rory Sutherland’s injury woes, but it will be hard for the Worcester man to earn back the number one jersey because Schoeman has been an eight or nine out of 10 every game so far.

In the tight he is clearly very good at his job, but in the loose he is also an effective carrier and a strong link man when the backs are lined up deeper. A real team player.

Ireland versus Scotland takes place on Saturday at 4.45pm in the Six Nations at the Aviva Stadium and is live on ITV