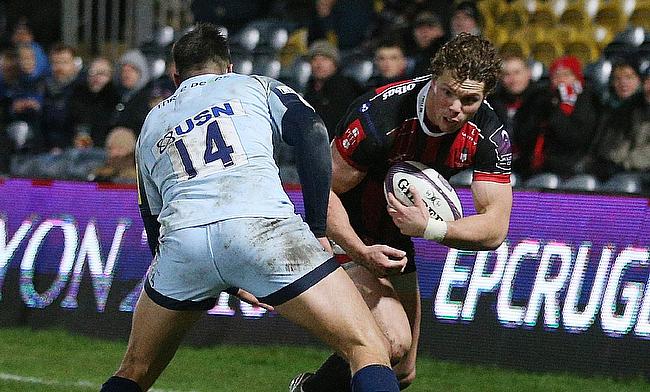 European Challenge Cup holders Gloucester maintained their 100 per cent record in this season's competition by claiming a bonus point 34-22 victory over Worcester at Sixways.

Gloucester tightened their grip on Pool Four as a result, making it three wins out of three to leave group rivals Worcester, Zebre and La Rochelle playing catch-up.

The Warriors were level 10-10 at half-time, but they were undone by an imperious attacking display from Gloucester number 10 Billy Burns, whose creativity and handling skills tormented the Worcester defence.

New England head coach Eddie Jones looked on as Hammond's try gave Worcester an early lead, only for Purdy to edge Gloucester in front before Lamb's drop-goal tied things up at the break.

Worcester had prop Gareth Milasinovich sin-binned 10 minutes before the break, while Gloucester number eight Lewis Ludlow was yellow-carded midway through the second period, but neither departure affected an entertaining contest.

Purdy's second touchdown, followed by a Cook try when Burns found him with a brilliant pass, took Gloucester clear.

And although Daniels scored from close-range, McColl rounded off a sharp move sparked by Laidlaw, then Twelvetrees caught Burns' kick to complete an impressive night's work.

In Pool Five, meanwhile, Grenoble went top above Edinburgh and London Irish - they clash at the Madejski Stadium on Saturday - by defeating hosts Agen 40-20 in bonus point fashion.

Tonga international prop Sona Taumalolo scored three first-half tries for the visitors, with wing Xavier Mignot touching down twice to leave Agen bottom of the group without a point.