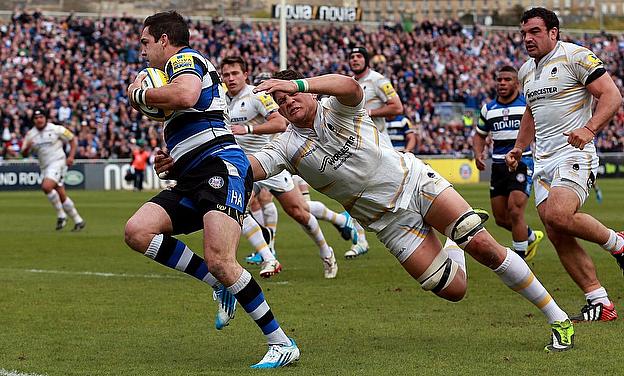 Bath left it until the 77th minute to claim the four-try bonus point that lifts them back into third place in the Aviva Premiership as they overcame Worcester at the Rec.

They lead Leicester on games won and, with Northampton to face at home before the final game away to another of the play-off contenders Harlequins on May 10, it looks set to go down to the wire.

Bottom club Worcester were never out of this game until Matt Banahan's late try, which denied them a losing bonus point. Up to that point they looked more than capable of winning, having scored three tries themselves through Josh Drauniniu, Andy Symons and Chris Pennell but came away with nothing.

Bath's other tries, all scored in the first half, came from Micky Young, Horacio Agulla and Nick Abendanon. George Ford, who was sin-binned for taking out David Lemi in the air, kicked nine points with Gavin Henson adding a penalty.

Worcester took advantage of a moment of hesitation in the home defence to take a ninth-minute lead. The ball was lost in midfield, then recovered, and a one-handed pass by hooker Agustin Creevy released Jonathan Thomas and Pennell on the right.

Right wing Drauniniu picked a good line to brush past Abendanon and side-stepped Young to score, although Ryan Lamb was wide with the conversion.

Ford found the corner with an accurate penalty in the 20th minute and sucked in enough defenders at a couple of rucks before scrum-half Young slipped inside Mariano Galarza to touch down. Ford added the conversion.

The second try followed just four minutes later and owed everything to Ford's poise with ball-in-hand as he ghosted past four defenders and flung an overhead pass to Agulla, who cut inside Thomas to score. With Ford's conversion, Bath were 14-5 ahead.

Lamb missed a very kickable penalty from less than 30 metres but Bath began to exert huge pressure in the scrum, winning three penalties in succession. They gained a further advantage in the 37th minute when Sam Betty was sin-binned for taking out Agulla in the air.

The clock was already at zero when neat interplay between the Bath half-backs allowed Abendanon to add a third try, this time unconverted.

Pennell took over the kicking for Worcester but was no luckier when offered a chance straight after the restart. Ford had no problems, however, with a 48th-minute attempt from 40 metres as the Worcester scrum again folded under pressure. Fortunately, their line-out worked like clockwork throughout.

Ford later found himself in trouble, being shown a yellow card for tackling Lemi, although it was one of the more innocuous offences of its type. The resulting reshuffle meant Henson replaced Kyle Eastmond.

In the confusion, Worcester created a well-worked try for Symons, converted by Pennell, to cut the lead to 10 points. The whole Bath pack were then caught offside from a clearing kick by Henson on the hour, Pennell making the score 22-15.

Bath began to show more urgency and Henson replied with a straightforward penalty soon afterwards but Worcester again had an answer as Pennell was set free on the left by a long Symons pass to score in the corner, although he could not convert his own try. Now both sides were looking for a four-try bonus point.

Bath had a let-off in the 73rd minute when Leroy Houston was penalised at scrum for releasing his bind and Pennell missed the penalty.

The home side, so comfortable in the scrums so far, offended again at the next, wasting a prime attacking position. Eventually, they rebuilt the pressure on the Worcester line and Ford slipped a simple pass for Banahan to score. Ford added the points.