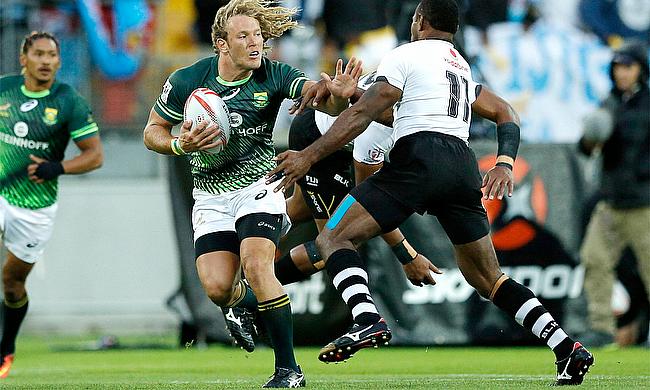 Blitzboks have consolidated their position at the top of World Rugby Sevens series following their victory in Wellington Sevens which they achieved after trouncing Fiji 26-5 on Sunday.

The win meant South Africa claimed the pole position in Wellington Sevens with 22 points and it was also their first victory in the capital city of New Zealand since 2002 after finishing second in 2014 and 2016 editions.

Fiji, who scored a solitary try in the final ended the Wellington Sevens at second position with 19 points and is followed by Scotland, Canada and New Zealand with 17, 15 and 12 points respectively.

Even though it was Fiji, who scored first in the final but Seabelo Senatla, who was named HSBC Player of the Final replied back with a try at the stroke of half-time to help Blitzboks bounce back. It was also his 180th try of his career which made him go past Fabian Juries (179) as the leading try-scorer for South Africa.

South Africa scored three more tries in the second half to shut the door for Fiji after Rosko Specman and a double from Ruhan Nel helped them secure a 21-point victory.

This was also the second time, Blitzboks won against Fiji in Wellington Sevens after defeating the reigning champions 31-12 in the group stage and skipper Philippus Snyman believes their defence was the key against the Rio Olympics' gold medalists.

"I think it's if you can just be in their face, our defence was great and everybody just kept to the structure," he said

Scotland claimed the Bronze medal with a 28-22 win over Canada while New Zealand won the fifth place semi-final after blanking England 0-24.