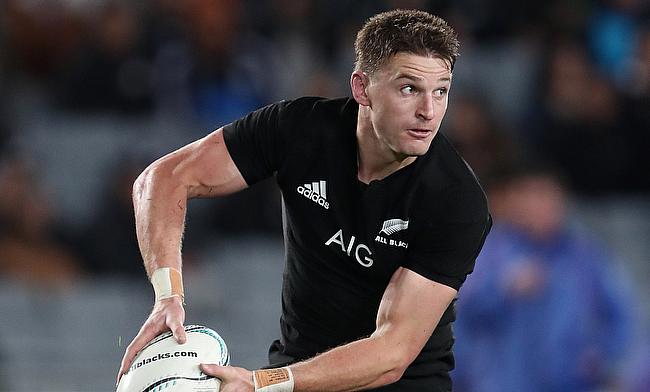 Beauden Barrett ran four tries as New Zealand outplayed Australia with a 40-12 victory in the second round of the Rugby Championship clash at Eden Park on Saturday.

The result also means the All Blacks have retained yet another Bledisloe Cup having previously won the Sydney game last weekend with a 13-38 margin. Also, they have maintained their formidable record against the Wallabies at Eden Park where they last lost a Test against them was way back in 1986.

New Zealand struggled to find their flow early on but the absence of Israel Folau was hurting for the visitors as Ben Smith collected a pass from Aaron Smith and eventually Beauden collected the ball and touched down in the 13th minute and also slotted the conversion.

Australia did not relent under pressure as they gained maximum possession and soon benefitted from it when Kurtley Beale and Marika Koroibete combined to send Will Genia over the line and Bernard Foley's conversion saw them level the scores 7-7.

As the half time was approaching, New Zealand once again gained momentum and once again it was Smith, who played a pivotal role and combined with Jack Goodhue to set up second converted try for Barrett in the 38th minute as the All Blacks gained a 14-7 lead heading into the break.

The home side upped the ante in the second half as they scored back to back tries in the 43rd and 48th minutes from Joe Moody and Liam Squire with Barrett improving both to take the scoreline to 28-7.

Reece Hodge responded back for Australia with a try in the 55th minute but Barrett had a day to remember as he capped off a fantastic game for All Blacks in the 62nd and 69th minutes to complete a 40-12 victory.