Bath take the spoils into the Amlin Final 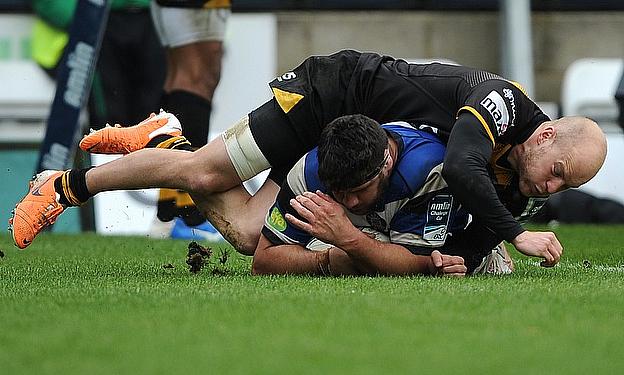 Bath booked their place in the Amlin Challenge Cup final with a narrow 24-18 win over Wasps at Adams Park.

Bath survived a nervous last five minutes and will now face Northampton in the final at Cardiff Arms Park on May 23.

The defeat leaves Wasps to concentrate on securing the last available place in the next season's European Rugby Champions Cup. If Wasps can maintain their current position of seventh in the Aviva Premiership they will face a two-legged play-off with a French side on the weekends of May 17 and 24.

Bath took some time to subdue their opponents and trailed 13-10 at the interval but a strong second half performance saw them to final. Two tries from Rob Webber and one from Anthony Perenise put them in the driving seat with George Ford kicking a penalty and three conversions.

Wasps battled throughout scoring tries from Will Helu and Ashley Johnson with Andy Goode kicking two penalties and a conversion.

Wasps made only change from last week's league win over Gloucester with Phil Swainston replacing the injured Jake Cooper-Woolley at prop.

Bath made six changes from their win over Worcester with Peter Stringer, Jonathan Joseph and Semesa Rokoduguni all being recalled to the back division.

Wasps took the lead after only two minutes with a penalty from Goode but the visitors responded to have the better of the opening period. Their reward was an equalising penalty from Ford.

A second penalty from Goode put Wasps back in front but they suffered a blow when their skipper, Chris Bell, was forced off with concussion to be replaced by Charlie Hayter.

Ford had the next chance for points but surprisingly missed a 30 metre penalty to leave Bath trailing 6-3 at the end of an even first quarter.

After 25 minutes, Bath took the lead for the first time when prop Perenise finished off a driving maul for the try which Ford converted.

However just before the interval, Wasps stunned their opponents with an excellent try. From a Bath drop out, Goode fed Elliot Daly, who ran elusively to create a try for Helu. Goode's conversion gave Wasps a 13-10 lead at the break.

Early in the second half, Wasps appeared to have extended their advantage when a well judged cross-field kick from Goode was collected by Helu, who fed the supporting Matt Mullan. The prop seemed to have a provided a try scoring pass for Kearnan Myall but the score was disallowed by the TMO, who ruled the pass forward.

That decision proved to be the turning point as back came Bath to regain the lead. Wasps carelessly lost a line-out in their own 22 with Webber on hand to crash over for the try, which Ford converted.

Bath introduced international props David Wilson and Paul James from the bench as their pack began to take control of the match, with Webber scoring his second try from a line-out drive. This was converted by Ford to give Bath a healthy 24-13 advantage at the end of the third quarter.

With 15 minutes remaining, Wasps clawed themselves back into the game. Ashley Johnson forced his way over from close range but Bath looked have to sealed victory when a neat pass from Ford sent Joseph over. However Goode protested to the referee and after consulting the TMO the try was ruled out for an earlier knock-on.

Bath lost Kyle Eastmond to the sin-bin following a tip tackle on Hayter, which set up a tense finish but the visitors just held on.