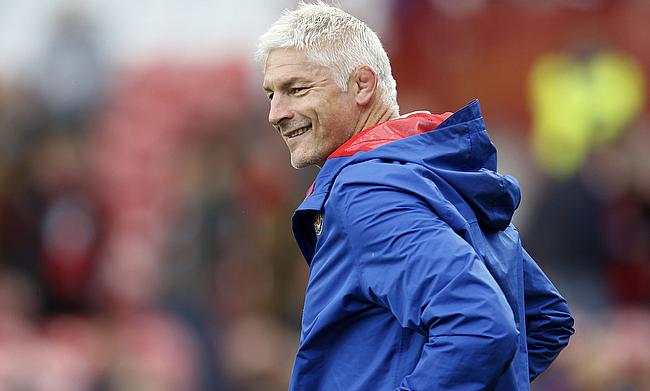 Todd Blackadder was pleased with his team's performance on Saturday
©PA

Alex Lozowski failed to score the decisive penalty for Saracens as they succumbed to a three-point defeat to Bath Rugby at Recreation Ground on Saturday in their Aviva Premiership encounter.

This was only Saracens' second defeat in the tournament but they continue to lead the table with 38 points from 10 games while Bath have moved to the second position with 35 points.

Fullback Tom Homer started the proceedings for Bath with a fifth minute penalty but the scores were levelled when Lozowski returned the favour in the 18th minute.

Another Homer penalty helped Bath reclaim the lead which got stretched to eight points when centre Max Clark strolled across the post. However, Saracens wing Sean Maitland responded with a try of his own as they trailed Bath by three points heading into half-time.

A drop goal from Lozowski helped the Saracens level the scores at the start of the second half but the fly-half was sin-binned in the 49th minute following which Homer added a penalty to bring Bath back with a three-point lead.

Lozowski had a chance to level the scores but he missed a penalty at the final stage to allow Bath escape with a three-point win.

Saracens rugby director Mark McCall believes both team had their moments in the game a "draw might have been a fair result".

"In the first half, we were poor and lucky to be maybe only three points behind at half-time.

"Bath were clearly the better team in that first half, but the second half, I thought we turned it around well.

"We had them under a lot of pressure and we had a lot of field position, and we couldn't capitalise on it. We had two or three very good chances. It's disappointing that we weren't able to score.

"I think everyone will agree, we probably should have got something more out of. Maybe a draw would have been a fair result."