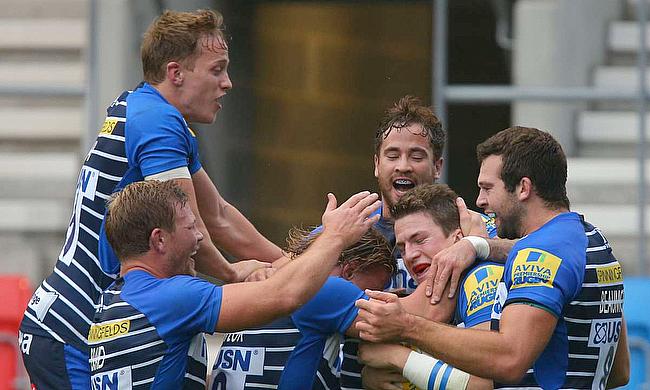 Sale Sharks took a huge scalp at the weekend
©PA

Round Three of the Aviva Premiership delivered us with more shocks as the Sale Sharks beat the Northampton Saints and Bath Rugby lost their first home game in fifteen Aviva Premiership outings at The Rec against Harlequins.

Elsewhere Saracens and the Leicester Tigers both maintained their 100% records and the Newcastle Falcons and London Irish remain without a Premiership victory between them so far this 2015/16 season.

Bath Rugby outscored their visitors by three tries to two however their discipline and the ever reliable boot of Nick Evans cost them their illustrious home record. Evans’ ten from ten performance off the tee pushed his personal tally to 63 points for the season and steered Harlequins to their first victory at The Rec since November 2011. The opening half was a tight affair with just one point in it at the break, 13-12, however early in the second forty that changed. Danny Care’s breakaway try, bursting off the back of a ruck and benefiting from Leroy Houston’s fumble, gave Quins the advantage. His try summed up the two sides at this point in time; one is confident and enjoying life whilst the other is uncharacteristically off colour and far from their clinical best. Tim Visser’s debut was hugely promising and centre George Lowe is enjoying being injury free while Bath Rugby's groove is still missing and they'll be frustrated after three rounds. Full Time Bath Rugby 28 Harlequins 38

At Kingsholm Gloucester Rugby held on to take the spoils in a closely fought match against the Worcester Warriors. The Cherry and Whites made the perfect start with Richard Hibbard’s try off a stellar driving maul however the Warriors weren’t fazed and struck straight back thanks to an interception from Cooper Vuna. The home sides’ captain had a day that he'll wish to forget and his substitution actually assisted Gloucester in finding a spot of flow. Much to the Shed's annoyance Gloucester had their chances however Jonny May’s try was disallowed and in the final quarter Worcester were persistently pinged in sight of the line but penalties were only the result. At the death the Warriors had the try line in sight however Darren Barry’s forward pass will haunt him for a while and cost them their second Aviva Premiership victory. Full Time Gloucester Rugby 24 Worcester Warriors 22

‘It was a much better team performance and something to get our teeth into’ were the words of Tom Coventry after London Irish’s defeat at Allianz Park. Of course the Head Coach would have preferred to be speaking on the back of a victory however Saracens proved that, even below their best, they are a tough nut to crack. The Exiles’ deserved their 7-3 lead at the break after resolute defence however in the end the home side did what top sides do and won in a slightly uglier fusion than usual. The Irish cogs are starting to turn with tries from Asaeli Tikoirotuma and Leo Halavatau, Blair Cowen's industry deserves another mention and they’ll be feeling a little better about life this Monday than last. Saracens, well they will move on, bring back some big guns and head for a good old Round 4 ding dong against the Northampton Saints at Franklin's Gardens. Full Time Saracens 24 London Irish 14.

At Kingston Park the Exeter Chiefs delivered a comprehensive 6 try victory over the Newcastle Falcons. It was difficult viewing for the Falcons’ fans and coaches as their side struggled to really exert any facets of their game on the Chiefs. Falcons’ Nili Latu was a one man band, he carried and tackled like a man possessed however couldn't do it alone.  The Falcons' defensive laps will concern Dean Richards and although they were missing players it wasn't pretty. The Chiefs were in fine fettle, their forwards are pumped and their backs shining. Matt Jess capped his 100th club appearance with a try and Damian Welch stood out amongst the pack with his ball carrying and physical performance. The Falcons have a world of pressure on their shoulders heading to Sixways next weekend while the Chiefs will breeze home looking forward to showing the Leicester Tigers what they're made of. Full Time Exeter Chiefs 41 Newcastle Falcons 3.

Speaking of the Tigers, they extended their unbeaten run at Welford Road to ten games and started to show us the impact of new Head Coach Aaron Major against local rivals Wasps. This fixture is one that continues to haunt Wasps as they haven't won at Welford Road since September 2008. A clinical second half sealed the deal for the home side as they pressed and showed their hand more in attack than we've seen for a long time in Aviva Premiership Rugby. New signing Lachlan McCaffrey has enjoyed a tremendous start to his Aviva Premiership season after always delivering for London Welsh and indeed Tigers' new look pack is purring. Dai Young stated that they have 'a lot of work to do' as they don't look as threatening as they did last year and he is right, Wasps' back line is filled with stardust however we haven't seen it deliver on the road and that is disappointing. Full Time Leicester Tigers 24 Wasps 16.

The Sale Sharks proved to us all that the AJ Bell Stadium isn't an easy place to travel to as they beat the Northampton Saints on home turf. Stephen Myler scored all of Saints' points converting his own try and slotting two other penalties however it wasn't a day to remember for the visitors. Sale's driving maul continued to fire and Sam James' first half try was a stunning, he was a late replacement for Sam Tuitupou and combined brilliantly with fellow academy graduate Josh Beaumont. As you'd expect Saints pressed hard and threw a lot at the home side however the chips just didn't fall their way showcased by Jamie Gibson having a try ruled out by the TMO. In the end it was a hard earned victory for the Sale Sharks and something for Jim Mallinder and his side tot think about heading home to face Saracens. Full Time Sale Sharks 20 Northampton Saints 13