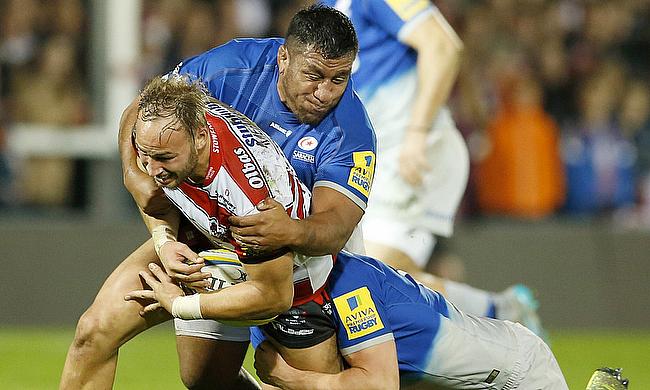 Round Two of the Aviva Premiership delivered plenty of drama with 21 tries and 245 points being scored during the six matches.

Across the country our Aviva Premiership sides wrestled with the weather conditions and each other and it made for compelling viewing.

On Friday night Kingsholm witnessed an arm wrestle of a fixture between Gloucester Rugby and Saracens. There was little to write home about in terms of free flowing attacking rugby, Mike Ellery’s try out mid way through in the opening half was the score of the night however had Billy Twelvetrees shipped the ball wide to Jonny May it could have ended differently. In a tense affair individuals shone, Will Fraser came off the bench early for Michael Rhodes and made the breakdown his domain. For Gloucester Rugby Willi Heinz had another storming fixture at scrum half and the contest between him and the returning Greig Laidlaw should be fascinating. Ultimately Gloucester will feel that the fixture got away from them, whilst Saracens will be quietly content heading home to face London Irish with two wins from two. Full Time Gloucester Rugby 15 Saracens 17

Back on home soil the Sale Sharks recorded their first win of the year over, a 5 pointer, over the tenacious Worcester Warriors. Steve Diamond’s men showed much greater purpose in attack however on Friday night it was the performance of their pack that proved the difference against the Worcester Warriors. The Sharks’ rolling maul worked superbly throughout the match and Number 8 Josh Beaumont put in a show stopping performance of his own. Beaumont is a talented individual and on Friday night showed his  full box of tricks from chipping delicately into space to hard nose ball carrying. The boot of Worcester Warriors’ Ryan Mills excelled from the half way line and delivered a warning to all sides of Worcester’s ability to punish however defensive holes cost them on the scoreboard. Full Time Sale Sharks 27 Worcester Warriors 13

At the Stadium MK patience was the name of the game for the Northampton Saints against the Newcastle Falcons and new signing JJ Hanrahan showed exactly what an asset he will be this season with a stellar outing. The match was poised at half time, 16-9, however when Todd Clever went to the bin the Saints pounced with two quick tries and took the game away from the visitors. Christian Day had a barn-storming day and was part of a dynamic and purposeful Northampton Saints pack which included Paul Hill showing exactly when at he can do which will have pleased Jim Mallinder no end. The Falcons’ rued their own reactions to the referee and still go in search of their first Aviva Premiership victory of the season. Full Time Northampton Saints 42 Newcastle Falcons 16

At the Ricoh Arena Wasps and Bath Rugby battled against each other and the less than ideal weather conditions on Saturday afternoon. Dai Young’s side brushed off their opening round defeat with a more purposeful adventure out on home turf and were boosted by the reintroduction of James Haskell and Joe Launchbury.  At the moment Bath Rugby still look a little rusty and aren’t up to full speed just yet, likely to be due to their fragmented pre-season with so many individuals away on international duties. Full debutant Niko Matawalu had a mixed day at the office, his enthusiasm and eye for a positive break were clear however his personal infringement, pulling back Nathan Hughes in sight of the try line, earned him ten minutes in the sin bin and Wasps a penalty try. Wasps were pushed all the way to the final whistle as Bath Rugby finally found a spot of rhythm in attack however the home side stayed strong defensively and in difficult conditions delivered their first victory of the 15/16 season. Full Time Wasps 16 Wasps  Bath Rugby 9

The Exeter Chiefs returned home with a bang as they brushed aside London Irish at Sandy Park. The Chiefs’ looked comfortable throughout and delighted us all with their free flowing approach to rugby. Jack Nowell looked hungrier than I’ve seen him before and it was his electric reactions and pace that delivered two tries for the home side with the second a length of the field solo score. It was another reminder that the Exeter Chiefs mean business this season and they’ll breeze confidently up to Kingston Park next weekend. London Irish had a slow start to the match, with shaky handling however  Blair Cowen’s addition at half time added much to their performance and the man that has just returned from Scotland duty more than deserved their only score of the day. There’s still a spot to work on for Tom Coventry however he should be encouraged by the performance  of Brendon McKibben at scrum half and Sean Maitland looked dynamic when he came on.  Full Time Exeter Chiefs 38 London Irish 11

At Welford Road the whistle of referee Tom Foley dominated much of the match between the Leicester Tigers and Harlequins and left Conor O’Shea seething at full time. The first half was a tight affair with both fly halves showing perfect radars and it could have continued that way for the full eighty had it not been for Harlequins’ bench. The visitors unloaded Danny Care, Nick Easter and Joe Marler on 50 minutes and subsequently enjoyed 93% of possession for the next 10 minutes. However the start of the frustration for their Director of Rugby was that 3 points was their only profit from that period. Leicester Tigers’ Laurence Pearce then scored a trademark forwards’ try that made Welford Road erupt however his side weren’t in the clear. Harlequins pressed and pressed, they turned down an opportunity to draw the game however just couldn’t get themselves over the line. Conor’s frustration was focused on the yellow card delivered to Sam Harrison with the try line in sight but no hint of a penalty try. Regardless of the officiating decisions the lesson of the day is that Welford Road remains a very tough place to visit and the home side’s will to win and ability to see matches out is stronger than ever.  Full Time Leicester Tigers 22 Harlequins 19