Doubles from Day, Foden down Newcastle 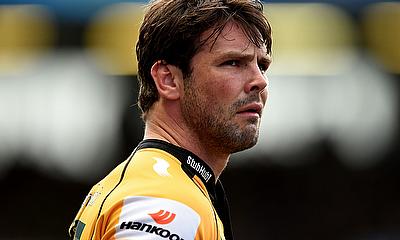 Northampton secured their first win of the season, taking all five points in a typically powerful 42-16 victory over Newcastle at stadium:mk.

Ben Foden and Christian Day scored two tries apiece, with Luther Burrell also touching down as Saints rattled up 26 points in the second half.

The Falcons responded with a try from Tom Penny and three Mike Delany penalties.

For Newcastle, Italy international Giovanbattista Venditti made his debut on the wing, while on the opposite wing Alesana Tuilagi made his first appearance after World Cup duty for Samoa. They also made four changes in the pack including Scotland's Jon Welsh making his debut at tighthead.

The win for Northampton owed a lot to their pack and they opened the scoring after just five minutes with a lineout drive that saw Day flop over. Stephen Myler added the conversion and a similarly easy penalty to make it 10-0.

Another Myler penalty was cancelled out by New Zealand fly-half Delany and Newcastle should have scored their first try after 23 minutes when centre Adam Powell carved his way through the Saints line, but, with just Foden left to beat, his pass to Venditti flew into touch 10 metres from the try-line.

A last-ditch tackle from Pisi stopped Simon Hammersley capitalising on a chip through after Newcastle turned over a scrum on the home side's 22-metre line. The Falcons had to be content with another Delany penalty.

An exchange of penalties saw the hosts go into the break 16-9 up, albeit with Newcastle looking the livelier in attack.

But Northampton started the second half as they did the first - with a series of lineout drives - and never looked back.

The drives brought a succession of penalties resulting in flanker Todd Clever going to the sin-bin and Day and the rest of the Saints pack finally drove over. Myler converted to make it 23-9 after 56 minutes.

Against 14 men Northampton finally found some space and some fluency as they took the kick-off the length of the field, helped by a lovely offload from JJ Hanrahan.

Jamie Gibson was stopped just short, but Burrell picked up and powered over. Myler missed the touchline conversion but the home side now looked secure at 28-9 in front.

Even when Clever did return to the action, Northampton were now firmly on the front foot, ploughing through the Falcons defence for Foden to add the fourth try and the bonus point. Myler made it 35-9.

Newcastle hit back with a nice try from a set move off a lineout 30 metres out. Chris Harris picked a great line to scythe through the defence and Penny went over in the corner, but Foden added his second try and Myler converted as Northampton got their season up and running.