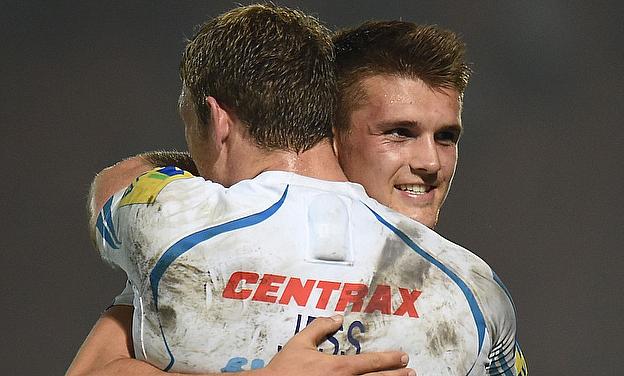 Henry Slade was instrumental in Exeter's win at the Stoop
©PA

This weekend the Aviva Premiership took centre stage and delivered us with some dramatic rugby as we hurtle head first towards the business end of the season.

The table continues to be hugely congested, in particular in the mid section where one point separates third place and seventh place so at this stage of the year, with 7 rounds to go, every single point counts.

The Round kicked off at Kingston Park where the Newcastle Falcons and Wasps shared the spoils following 80 minutes of gripping rugby. The manner in which the Falcons bounced back after such a dismal Round 14 must be hugely commended and it bodes well for their development as a side for lesser teams could have crumbled under the pressure to perform. Wasps will be frustrated as they didn't play to their full potential and will rue their inability to take a hold on the game however one man shone and that was Elliot Daly. Daly was majestic as he created a try and then scored one of his own all in just 100 seconds of play. The Falcons put in a physical shift, Sinoti Sinoti gained meters galore with his magical feet and the match went down to the wire. Juan Pablo Socino's interception proved to be the decisive score in spite of Wasps having the last say of the game with Guy Thompson's try. Newcastle 23 - 23 Wasps

At The Rec, Bath fell at the hands of a steely Northampton Saints side as Jim Mallinder’s men showed that they have absolutely no intentions of relinquishing their Premiership title without a fight. As expected it was a brutally physical battle and in spite of a strong Bath start thanks to Olly Woodburn's try, the Saints felt their way back into the game. At the break the game was precariously hanging in the balance, ready for one side to take control and it was the visitors that did so, with sensible rugby and the accurate boot of Stephen Myler. Tom Homerfound his first Rec run out a little tougher as he missed four penalties and crucial points; however as we all know rugby is a team sport and Bath just started to chase the game a little too early. On the whole it was impressive from the Saints, they showed steely reserve and patience to take a stranglehold on a hugely important match and the result opens up a spot of daylight for them at the top of the table. Bath 13 - 21 Northampton

At the AJ Bell Stadium the Sale Sharks delivered the cherry on top of what had already been a great week as they beat Saracens for the first time since 2011. Saracens had a late shuffle of personnel to contend with as Charlie Hodgson pulled up in warm up and that meant that Alex Goode moved to Fly Half, Chris Wyles came in at Full Back and Nils Mordt took his place on the bench. The man of the moment Danny Cipriani pressed his case for further International game time as he orchestrated proceedings with ease and grace; Cipriani coolly slotted his kicks and delivered a supreme offload for Sam Tuitupou's first half try. Saracens, well they were uncharacteristically off colour and it was their own ill discipline, particularly in the first half, that pushed the game away from them combined Sale's huge desire to win. Last weekend Steve Diamondshared that his team 'had to take a significant scalp over the next three weeks' to continue their quest for a Top 6 finish and they have done it at the first time of asking, impressive. Sale 14 - 10 Saracens

In London, Harlequins suffered at the hands Exeter Chiefs and in particular the boot of Henry Slade who delivered 27 of his side's 32 points to gain their first win away from home since November. Slade hit six penalties, two conversions and scored a try of his own to turn the heads of everyone in London and I expect also the England management team. Dave Ewers was industrious as always in the back row and Jack Nowell was imposing in the centre as he pushed for his own inclusion in England's squad for Ireland this weekend. Harlequins worked hard and stuck at it, Matt Hopper's try scoring finish was sublime however frustratingly for them they didn't make their possession or numerical advantage count, for Exeter had 3 yellow cards during the 80 minutes. It was a significant win for the Chiefs on the road and one that leaves O'Shea's side with a small mountain to climb. Harlequins 21 - 32 Exeter

At Kingsholm the Cherry & Whites' delivered a bonus point victory over London Welsh however it was marred by injuries to three key men; Charlie Sharples, Matt Kvesic and Henry Trinder. The severity of all three is yet to be confirmed formally by the club and it is a particular cruel blow for Henry Trinder who was making his first start in three months post rehab for a shoulder and hamstring injuries. James Hook delivered 100% accuracy from the kicking tee as he contributed 18 points to their tally and Henry Purdy's try scoring double was brilliant for the young back. As always, London Welsh didn't ever give up however their porous defence cost them any chance of staying in the game, sadly that is a consistent theme for the season. In the end it was a routine win for Gloucester however costly in terms of personnel and continued agony for Welsh. Gloucester 48 - 10 London Welsh

The final game of the weekend was in Reading at the Madjeski Stadium where London Irish hosted the Leicester Tigers. The elements and mud strewn pitch didn't help proceedings however both sides did play some positive rugby. In the opening forty Leicester's forwards took control of proceedings at the set piece and collectively delivered a lesson in scrummaging led by Logovi'i Mulipola. Freddie Burns looked assured at Fly Half and kicked his side into all of the right places and it was a testament to his proficiency that the game changed shape when he didn't come back out for the second half following a head knock. London Irish were much more streetwise during the second forty as they enjoyed the lions share of possession however couldn't make it count due to a solid orange defensive wall and their own imprecision. A win is a win for the Tigers however it has been more than 5 hours since they have scored an Aviva Premiership try and that will be concerning for the former Premiership Champions. London Irish 6 - 12 Leicester