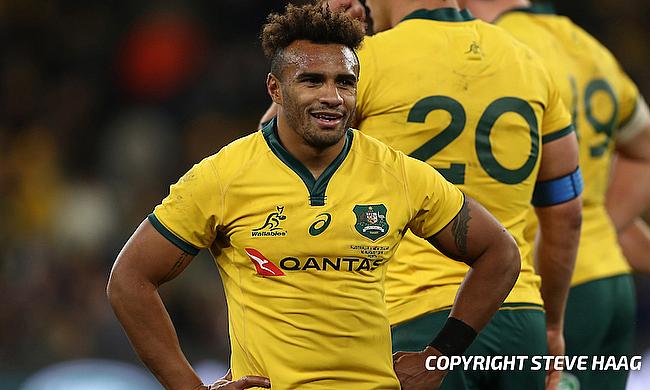 Australia were made to work hard by stern defence from Georgia as they completed a hard-working 27-8 win in their final game of the opening round at Shizuoka Stadium Ecopa on Friday.

The bonus-point win meant Australia move to the top of Pool D table with 16 points but Wales have a chance to surpass them as they face Uruguay on Sunday while Georgia, who were impressive today finished fourth with a solitary win from four games.

The physical rugby was evident in the early stages as seen in the 11th minute with Mamuka Gorgodze and David Pocock exchanging clashes. The Wallabies were desperate to get the first points on the board with Georgia looking good on defence until the 22nd minute when Nic White touched down after a build up from Matt To’omua. The fly-half also kicked the conversion to take them to a 7-0 lead.

Georgia got their first points on the board in the 28th minute after Australia were penalised for infringement and Soso Matiashvili slotted the penalty goal that reduced the gap between the teams to four points. Australia were reduced to 14-men temporarily when Isi Naisarani was yellow-carded for cleaning out illegally as he made contact from the bicep direct to the head. But, despite the setback, it was Australia, who got the points with a penalty kick from Toomua as the teams went into the break with a 10-3 scoreline.

Georgia looked to apply pressure on the Wallabies as they ran inside the 22m line but Mamuka Gorgodze dropped the ball and it proved costly following which Australia regained full-strength with the return of Naisarani. With no points scored by either teams in the third quarter, the game was heading for a close finish before Marika Koroibete provided a breathing space for Michael Cheika's men and Toomua's conversion stretched their lead to 17-3.

Georgia did not relent under pressure and clawed their way back with a 71st minute try from Sandro Todua but Australia closed the game well with back to back tries from Jack Dempsey and Will Genia in the final five minutes and despite To’omua missing both the conversions, Cheika's men sealed a 27-8 bonus point victory.

Australia will face England in the quarter-final in Oita on 19th October provided Wales win their final game of the round against Uruguay.