'Api has raw talent, it will be great to see what he can do on the big stage' 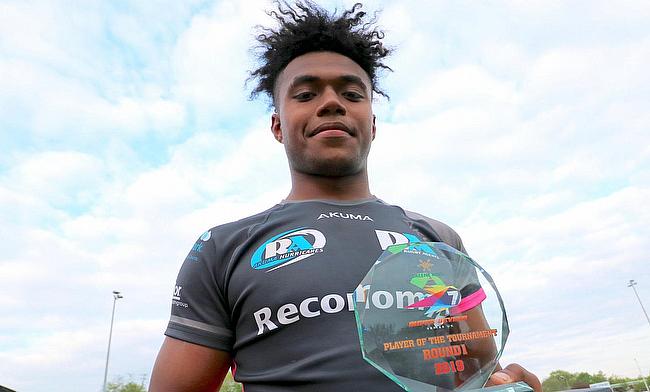 James Rodwell may be making his 93rd and final appearance for England on the World Rugby Sevens Series circuit this weekend in Paris, but for seven of his teammates, it will be just the start of their journey in the sport at the top level.

Api Bavadra (Bishop Burton College), Chris Cook (Bath Rugby), Calum Waters (Harlequins), Max Coyle, George de Cothi (Loughborough University), Ollie Hassell-Collins (London Irish) and 13th man Will Hendy (Bath Rugby) have all been given a chance to show what they can do as 2018/19 comes to an end.

And the first of those names - Api Bavadra - really jumps off the page given that a month ago not many people had heard of this hidden gem.

Born in the UK to Fijian parents, Bavadra moved to England with his family when he was a youngster and after returning to the land of his birth for some of his school days, he has been back on these shores of late and is studying at Bishop Burton College in Beverley in Yorkshire.

Mike Umaga, the director of rugby at Bishop Burton, and coach Tomasi Tanumi, knew early on that they had a special talent on their hands.

Thanks to the man upstairs ???? https://t.co/jViXD0ESUd

“Api came in at the start of this season and straight away Mike knew that he wanted him to be playing for the best team that Bishop Burton had,” Tanumi told TRU.

“He was pretty raw at that time and needed to learn more about the game, but he was willing to put in the hard yards and that was no problem.

“Api was a winger at first, but then he was struggling to get many touches of the ball so we decided to move him to No.8 so that he could get his hands on the ball and get involved - and boy did he make an impact!

“After the XVs season had finished I wanted to get him straight into our under-18s Bishop Burton sevens squad and we managed to take him with us to the AOC Sport National Championships in Nottingham towards the end of April.

“In sevens we played him as a prop and we managed to win that event.

“I knew that in May the Akuma Hurricanes, the select team I play for and coach, had two events on the Super Sevens Series UK so I took him to those and in the first one at Bury St Edmunds [May 5] he just blew everyone away as we went on to win the tournament and he was named the player of the day by quite some distance.

“He really announced that he had arrived there and then he played for us again at the second event at Broadstreet in the West Midlands on May 18.

“Once again he played well and then he was invited down to England Sevens training last week ahead of them playing at the Twickenham Sevens.”

“This gives us the chance to play some really young and talented guys."

England Men Sevens have announced the squad for the @WorldRugby7s series finale in Paris ????

“Simon Amor clearly liked what he saw from Api and for him now to be playing for England just a few short weeks after his Hurricane debut is crazy, but well deserved.

“He is a big lad, but he has a great touch and I think he will bring something new and something different to the England Sevens squad and I feel he can thrive at that level.”

Jonny Stiles, who is a director at The Rugby Agents and runs the Akuma Hurricanes, said: “A few weeks ago Tomasi said to me ‘look I have this 18-year-old kid who I would really like to get involved with the Hurricanes’.

“I have known Tomasi a long time and he knows a good player when he sees one and when Api came up to the first tournament he was a breath of fresh air, he blew everyone away.

“For a kid of just 18 his physique and skill set are superb and he is very quick, so it is perhaps no surprise that Simon Amor has taken a look at him and liked what he has seen.

“I am very excited to see how Api gets on this weekend.”

The next opportunity to qualify for the 2020 Olympic Games will be through the European regional qualifier event in Colomiers, France in July and Bavadra will hope to be involved then after a good first impression this weekend.