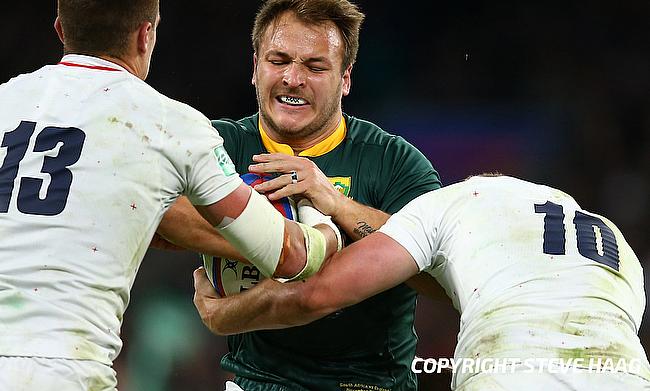 Harlequins have confirmed that centre Andre Esterhuizen has signed a new deal with the Gallagher Premiership club.

The 21-year-old joined Harlequins at the end of the 2019/20 season and has gone on to make 20 appearances for them scoring three tries. He was also one of the try-scorer for the Quins in their historic Premiership final win against Exeter Chiefs earlier in the year.

"Playing for a club with such a positive mindset towards playing the style of rugby we do is a truly enjoyable experience.

“I think everyone wants to play for a team where you’re encouraged to try things on the pitch and be unconventional. We did that last year and made some great memories doing it the Harlequins Way.

“We have a strong group here with some great people and talented players. I’m very happy to re-commit with Quins, and I’m looking forward to playing my first full season with a Stoop packed with fans wearing the Quarters.”

Prior to his association with the Quins, Esterhuizen played for Sharks between 2013 and 2020 while also having a stint with Japanese side Munakata Sanix Blues.

“We are delighted that Andre has re-signed with us. He’s one of the best in the world at getting gain line in the midfield and is a huge asset to playing the Harlequins Way," said head coach Tabai Matson.

“Andre has a great manner around the squad. While he’s probably what you could call an agent of chaos on the pitch for our opposition, he’s a very cool, composed character around training and has been great to work with.

“It’s great to have Andre recommit and know that the fans can look forward to seeing him play in person as we welcome home our supporters in full capacity this weekend.”