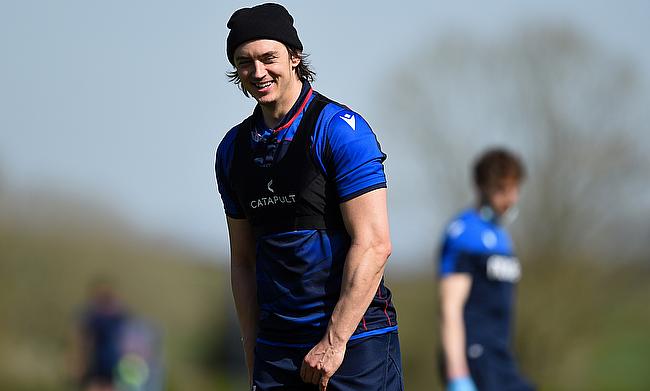 Since making his return to rugby union in November after three years in the NFL, Alex Gray has made four appearances from the bench for his new club.

Having become accustomed to American Football's intensity at its highest level, Gray spent six weeks reconditioning before even picking up a rugby ball. Building up his aerobic fitness over that time, the wing even shed eight kilograms in the process ahead of making his debut for Bath against Sale Sharks in February.

Then, for what is now the third time in his career, Gray has turned his attentions to learning a new position on the field.

Starting as a powerful back-row with Newcastle Falcons and London Irish, he then upskilled himself as part of the England Sevens programme.

Injury prevented Gray from achieving his goal of joining Team GB at the Rio Olympics in 2016, so after some time back playing the 15-a-side game with Carnegie, Gray was approached by a scout as part of the NFL’s first intake for the International Player Pathway Programme.

Converted into a tight end over a six-month period, Gray was signed by the Atlanta Falcons, and the likes of Christian Scotland-Williamson and Christian Wade have also made the move from rugby union into the NFL.

Contracted as a practice player originally for the 2017 season, Gray remained in Georgia until 2020. After spending that time in America, the winger says he learnt plenty about the world of professional sport that he had never seen before.

“I have never experienced anything like it,” Gray told TRU. “The truth is, and I get asked by everybody what it was like, and until you have actually been in the building, gone through the doors, done training camp, done games, seen the fireworks and the flyover and police escorts everywhere and the private jets and all these different types of things, it is very hard to describe the sheer size of the NFL. 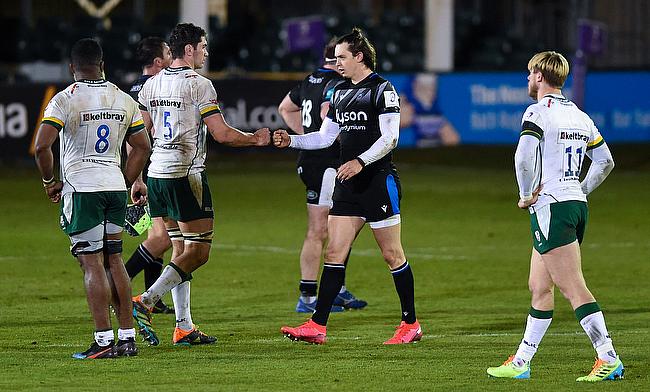 Since joining Bath, Gray has made four appearances for the club, twice in the Premiership and twice in the Challenge Cup
©Patrick Khachfe / Onside Images

“Also, some of the stuff that comes with day-to-day life. The dog-eat-dog nature of it where some of the relationships that you build are few and far between because you could be getting really close to a guy and all of a sudden, the next day he is gone, or you are both gone. It really is crazy.

“It really is the top echelon of professional sports and that is all I wanted. I knew I had to leave nothing in the tank to survive because I was coming in at such a disadvantage. I think the career average [for players staying in the NFL] is three years, which just shows how tough a place it is to earn a living.

“But it is just a different level. Everything is just as if someone has turned the volume up to max. You know Americans, that is the kind of people they are. They are loud. They like brash, they like talking shit to each other, it is really, really cool to be a part of.”

Coming back to rugby was in many ways thanks to a perfect storm. Waived by Atlanta pre-Covid, Gray was unable to secure a visa because he needed to be attached to a team whilst clubs were unwilling to sign him unless he had that form of documentation.

For months, the 29-year-old was stuck in a purgatory of what his future may hold. A decision had to be made as to whether he would carry on trying to achieve the goal he had set himself back in 2017 of living out the American dream or return to the sport that allowed him to embark upon a new adventure.

One thing that no doubt contributed to his return was time spent in Bermuda over the duration of the first-ever World Tens Series competition. Travelling to the island in a support role for the London Royals, Gray was back amongst many of the players he played with and against in the England Sevens set-up before moving to America.

However, Gray admits the seed to his return to rugby was first sewn back in 2019, when watching on as a fan in the early hours of the morning.

“I guess it had always been in the back of my mind about playing for England,” Gray said. “I got up very early in the morning and watched the World Cup final and I just had this urge to play for England, which I always have.

“I understand that I am the absolute envy of every player here, every player in the Premiership, every player in rugby who will never get a shot at even going inside an NFL locker room and just spend a day in that life. What would they give to do that?

“Even though I was there doing that, and living that life, there was always a part of me that still wanted to play for England and do that. I think watching that World Cup really solidified that for me, so it is funny that a year later, I am finding my way back to rugby.

?? With the #London7s being played this past weekend....it had me reminiscing. It was always a huge honour pulling on the white shirt of @EnglandRugby and playing in front of family and friends at Twickenham ?? pic.twitter.com/JxS5nCvYKu

“I think after going to the NFL and proving what kind of athletic potential I have, it just made me think 'why not?' If I had been good enough and crazy enough to do that, then why couldn’t I come back to the sport I have been playing since I was a child? Taking all the lessons I had learnt, taking all the physical gains I have had, why not just put that into trying to make that dream a reality?

“There is also the spin of the Olympics. I missed out on the Olympics over four years ago now. What an achievement that would have been so there was a couple of carrots back in the rugby world that were there for me.

“The other part of it is, I had been away from my family, friends, everything for so long. I was over there in America by myself and sometimes the environment doesn’t lend itself like a rugby environment would. You can join any rugby club in the country and get a bunch of 30 mates, but it is not like that (in the NFL). I am not going to sugar-coat it; it is not like that at all.

“There are some very, very good people, people I will stay in touch with and be friends with for my entire life now in that game, but there is not as many as I have met in rugby, that’s for sure.”

Born and raised in County Durham, it was early on that Gray was seen as a bright young star in English club rugby. Signing professional terms to play in Newcastle’s first team at the age of 17 having already captained England’s U16 and U18 sides, he eventually went on to skipper his country's U20s side.

Across his two years in that team, Gray played with several current England stars such as Jamie George, Mako Vunipola, George Ford, Jonny May and now clubmate Jonathan Joseph. 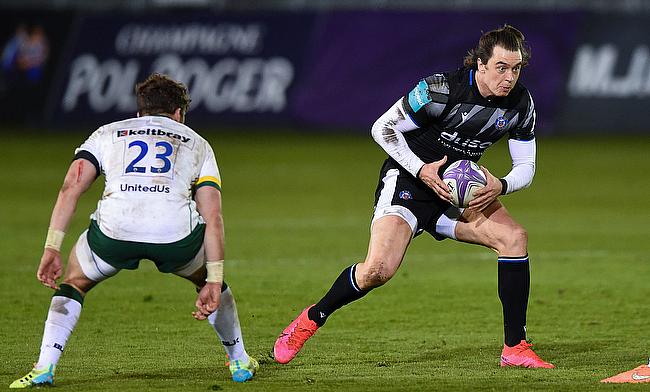 Surrounded by further talent at Bath including Anthony Watson, Ruaridh McConnochie, Joe Cokanasiga and Semesa Rokoduguni - all of whom have represented England - as well as being mentored by the familiar face of Neal Hatley, who coached Gray during his time with London Irish, the 29-year-old firmly believes he is in the best place to achieve his goals.

“The tough thing for me would have been if I had gone to a club, and I am not trying to disrespect any clubs, but I wanted to know that wherever I went, I wanted everything to be ticked off so that I could turn up and work on being the best player I can be and that was probably the most important thing for me.

“They had everything sorted so that I could just slot in and learn and get better and improve. It is a very well-run club and hasn’t disappointed in that sense for sure.”

But to get in Eddie Jones’ England squad, Gray has got to play consistently for Bath when selected.

Describing himself as being in every forward’s dream of escaping the pack in order to hug the touchline, in many ways, Gray is a second incarnation of Matt Banahan. Now, the 6’5” and 110kg back is hoping that the rest of the season will be an opportunity to showcase his ability, especially with a Lions tour on the horizon and places up for grabs in the England team.

Gray feels rugby has 'changed’ since he left for the NFL and he is now learning how to manage a backfield, as well as the kicking game. Of course, these are some of the most important aspects in the sport at present and are key to making the step up to Test level.

Having already made the transition to the NFL, the move back is going to be somewhat simpler but to get any caps for England, it is pure want and desire that will take Gray to the peak of yet another mountain in his sporting career, and he has that fire of desire lit deep within him.

“It is the complete reason I didn’t take a deal in France, didn’t go to Japan or do any of that to try and cash in,” Gray said. “The NFL chip carries a lot of weight, so for me being here in England, that is exactly why I am here, to try and play for England, to try and help Bath win some silverware and then put me in the shop window for that England team.

“That’s what I want to do. I am absolutely going to make no secrets about it because no one can tell me it’s not possible. Four years ago, I stepped onto a plane to Florida and six months later was playing in an NFL team, so will it work? Will it not? Who knows? That is for the future to tell, but that is definitely my ambition, and it burns more brightly than ever.

“I am probably more driven now than I was as a 21-year-old because you go through life and realise what really is important and the legacy you leave, the story you write for yourself when others read it.

“That’s what is really important for me, to try to inspire other guys and the kids coming through in any walk of life. It just runs deeper now and going to the NFL has given me that perspective. It is a very cool thing for me to be able to chase my first dream and try to aspire others on their way as well.”

Having come off the bench in both of Bath’s Challenge Cup knockout fixtures, Gray’s attention now turns to the visit of Leicester Tigers at The Recreation Ground on Sunday afternoon, as each side looks to make it into the top six of the Gallagher Premiership.