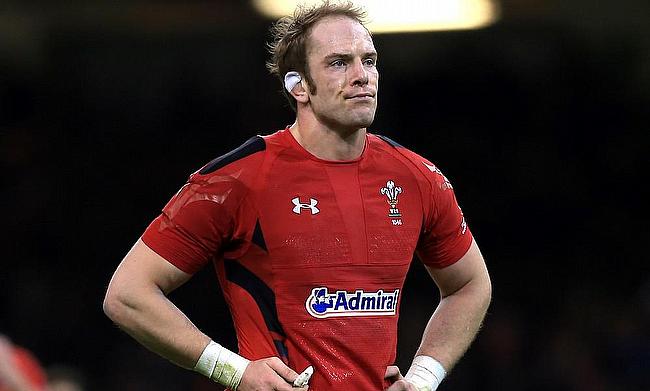 It’s one of the most highly anticipated fixtures in Wales’ schedule between now and the next World Cup, but the injury to Alun Wyn Jones is probably the setback that Wayne Pivac feared the most as he begins piecing together his squad for France 2023.

Whereas last autumn Wales opted to add depth to their ranks, fast forward 12 months and it is the loss of their talismanic captain until after next year’s Six Nations which presents Pivac with his latest challenge.

The Wales boss still feels his skipper will be integral to their World Cup plans, but as they prepare to host world champions South Africa at the Principality on Saturday, you wonder how Pivac will fill the chasm created by Jones’ absence.

The sight of Jones cradling his arm as he trudged off in last week’s game against New Zealand has become a familiar image.

In the summer, the 38-year-old damaged the same shoulder in the British and Irish Lions’ opening warm-up match with Japan and whilst the superhuman Jones made a stunning comeback to join the touring party in South Africa, there will be no such heroics this time around.

“I don’t think he will be available for the Six Nations,” Pivac said. “He will be back before the end of the season. The intention is always to see if Al can get to the World Cup and I think it is a realistic goal.

“You have just got to see him in training and when he’s playing because of the effort he puts in. I don’t see anything going anywhere near backwards in terms of his performance. It is not ideal for him.

“We’re all looking forward to him playing 150 Test matches for Wales, but that is still a goal and I’m sure he will get there.”

Pivac will now be assessing the display of Dragons lock Will Rowlands, who will step into Jones’ shoes this weekend to start alongside Adam Beard.

Jonathan Davies will captain the side against the Springboks and his experience could be vital if Wales are to get the better of the world champions, given hooker Ken Owens is still recovering from a back problem.

On the second-row, Pivac added: “It is not as if we have dozens of them with genuine international height, so we have got to work hard with what we have got and use our strengths.

“We’ve lost two overseas (Jake Ball and Cory Hill) and now Alun Wyn is injured. Will Rowlands is one we looked at because we knew we didn’t have a lot of genuinely big men. Adam Beard is going from strength to strength so you can see a bit of the future there.

“We are having a good look and hopefully building those stocks as the World Cup is not too far away. We know it is a results driven game, but you have got to play the hand you’re dealt sometimes.

“At the moment, this is about development opportunities for some players and other more experienced players holding onto their positions.”

The absence of Jones will arguably sting the most for Pivac and not having the likes of Taulupe Faletau and Ross Moriarty available has provided another headache for the Wales head coach.

However, a plus point for Pivac is the return of their Gallagher Premiership stars, with Dan Biggar coming straight into the fly-half shirt whilst Nick Tompkins (Saracens) and Louis Rees-Zammit (Gloucester) also start.

But the overwhelming positive for Wales is bringing Ellis Jenkins back into the fold. The flanker will play his first international game for three years after recovering from multiple knee ligament damage he sustained against Saturday’s opponents.

He will join Aaron Wainwright and Taine Basham - who impressed against the All Blacks - in the back-row.

“I have had a similar injury and know what it is like,” added Pivac. “It is not pleasant and a long, hard slog. It will be a special day for him.

“He has had two years of watching and frustration and will be excited to get out there. He’s motivated and will want to hold his place in the team and push on to bigger and better things.”

Whilst Jenkins will hope this is the start of his journey to France 2023, Wales will feel facing South Africa is where their own preparations truly get underway.

?It's a different challenge to New Zealand?

After a depleted side were eventually picked off by New Zealand last weekend, Jacques Nienaber’s men will provide Wales with possibly their biggest test since they were beaten by the Springboks in the 2019 World Cup semi-finals.

“South Africa are coming to town as world champions and it offers a different challenge to New Zealand,” said Pivac.

“They have got a massive forward pack and they are big across the park. They bring a huge aerial threat so it is going to be a different challenge.

"It is a big Test match and we need to get what we think is the best side out there. We are looking forward to having this side out there on the weekend and it will be really interesting to see how we go.

“There is a lot of experience gone from our pack and with what is coming in terms of the South African pack, it is going to be a massive challenge and it will be interesting to see who steps up. We have to make sure we are smart in how we play the game."