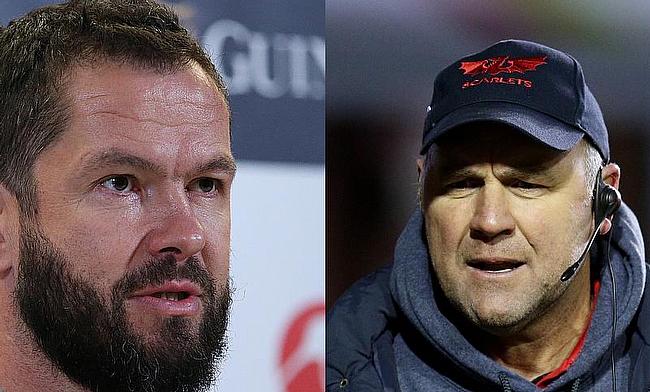 How long until we can begin to fairly assess a new coach’s progress?

For Wayne Pivac and Andy Farrell, a year, even one so unusual, seems about fair, and as Ireland and Wales prepare to kick off the Autumn Nations Cup in Dublin on Friday night, the two head coaches begin with questions to answer, and plenty to learn about the direction of their sides.

Twelve months on from a World Cup that brought the curtain down on Joe Schmidt and Warren Gatland’s tenures in charge of Ireland and Wales, respectively, replacing two transformative figures so embedded in their adopted rugby nations has proved predictably tricky.

For Farrell and Ireland, it has been a relatively steady start. Since his promotion from defence coach to succeed Schmidt, Ireland’s record reads three wins, two defeats, both away from home against the Six Nations’ top two. He is playing par golf – plenty of positive growth, but so far without a performance to define his early leadership.

Pivac would take steady. Tasked with improving the Welsh attack and building a side capable of challenging at the 2023 World Cup, Wales have struggled to grow into the style which caught the eye when the New Zealander was in charge of the Scarlets.

“I’m certainly not seeing it and if it is [there] then the players are very good at hiding it!"

Wayne Pivac hits back at rumours of discontent within the squad https://t.co/Jeuqqk3Jue

They have struggled, particularly, to involve their better ball carriers in attack intelligently, and thus win collisions and create opportunities to play with tempo.

A drab showing against Scotland meant Wales exited the Six Nations with just a sole victory over Italy to show for their efforts, and the wolves are beginning to scratch at Pivac’s door.

A fifth consecutive defeat meant an end to Byron Hayward’s short time in charge of the defence amid rumours of discontent within the squad about his coaching style. Gethin Jenkins is now in interim charge of Wales’ defensive efforts having taken on a technical coaching role after Sam Warburton stepped down.

The departures of Hayward and Warburton in isolation are not necessarily that bad, given the relatively fluid nature of certain international coaching positions. However, combined with the five consecutive defeats, you get a perception of, in Pivac’s own words, “a mess”.

“We are in this together,” Pivac said ahead of Wales’ opener. “It is a collective effort and not all about putting it on the players. We have not been flash in defence or attack and need to show an improvement. We believe we can turn this around.

“The vibe in training has been very good this week. If this is a sinking ship, the players have been very good at hiding it. We did not play a lot of rugby against Scotland and a bit of the selection is about giving players another chance because we believe we can negate Ireland’s strengths.”

Pivac should be safe in his role through to the spring at least. To sack him one year into a four-year contract, albeit with a halfway break point, would be a short-sighted decision, and the uncertainties caused by the pandemic mean there may be financial reasons not to change coach.

But Pivac does need an Autumn Nations Cup that shows promise and potency, perhaps not exclusively through results, with tough trips to Dublin and Twickenham, but certainly via positive performances.

Given the relatively low stakes of a likely one-off competition added to the calendar of a most curious year, coaches may be more willing to look at the breadth and depth of their squads. A group game against Georgia may particularly offer both coaches the opportunity to look at some new combinations.

This may mean a start for Callum Sheedy for Wales, primed for a debut from the bench on Friday, as an alternative to Dan Biggar at fly-half as well as further opportunities for Louis Rees-Zammit and Shane Lewis-Hughes. All have the potential to evolve into key players for Pivac, who will be looking to find an identity and the players that best provide it.

Farrell also has questions to answer. The form of captain Johnny Sexton is beginning to cause concern, with Joey Carbery’s untimely injury leaving Ireland short of a second serious contender for the starting berth at ten.

Carbery’s absence, along with the injury to Garry Ringrose, has shorn Farrell of two potential second playmakers, limiting the implementation of a wider game that attack coach Mike Catt has shown signs of favouring.

The composition of Ireland’s back row is more a problem of plenty than of lack of resource, but finding the trio with the right combination of skills to grow together is proving a conundrum.

More of a concern will be at full-back after Jacob Stockdale, who starts in the 15 shirt against Wales on Friday, misfired in Paris. Ireland have plenty of options, but finding a back-three configuration that provides the necessary solidity, positional aptitude and thrust is proving difficult with Jordan Larmour absent, though the injection of debutant James Lowe adds real quality.

Farrell is aided by, and can draw on, the strength of Irish domestic rugby. Eleven Leinster players make his starting 15 (the greatest number of starters from one province in an Irish side since 1981), providing a strong, in-form cohesive core, while Ulster and Munster are also unbeaten in the short Pro 14 season so far.

Conversely, the domestic structure in Wales is plagued with uncertainty on a number of issues, which will not help Pivac – instability domestically can breed instability internationally, but if he can overcome some of the issues with a positive campaign, the foundations will begin to be laid for a push towards France in 2023.

So while Ireland are rightly favourites for the inaugural Autumn Nations Cup fixture, a novel tournament in a novel year presents new opportunities for both Farrell and Pivac. Four weeks from now we should know a lot more about the direction of Wales and Ireland under their new coaches.