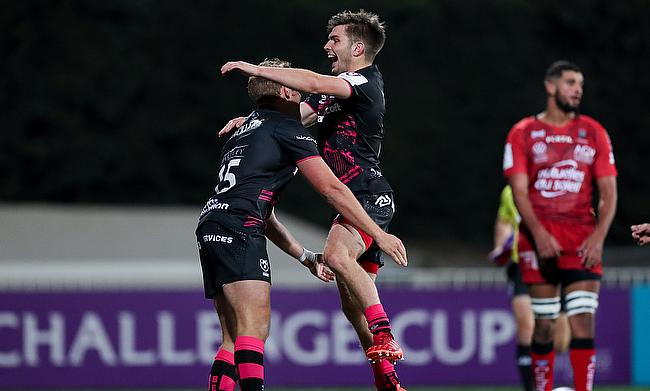 Since the 2019 World Cup, the question of who will take over the reins from Ben Youngs as the first-choice scrum-half has raged on.

So far, Youngs has remained the incumbent starter, whilst Wasps’ Dan Robson began to make a breakthrough in the Autumn Nations Cup earlier this winter. However, who the long-term successor is remains unknown.

Since the focus shifted back to Premiership Rugby following the conclusion of the international calendar in 2020, even more English scrum-halves have emerged. With this in mind, TRU has listed four players that seem to have the capability to become part of Eddie Jones' plans.

Since leaving Hartpury in 2018 for Bristol Bears, Harry Randall has hardly missed a beat. Having represented England at U20 level, he is one of the Premiership’s most consistent scrum-halves, having become known for his dogged determination and attitude to always want to be on the winning team.

This string of characteristics makes people believe that the 23-year-old is ready for the step up to Test level. There is also added motivation to get Randall into an England camp because there is the strong possibility that he could be selected for Wales given he represented the country at U16 level.

Last season's #ChallengeCupRugby final had it all!

Randall's Welsh connections mean that Wayne Pivac may want to add the exciting scrum-half to his Six Nations vision. Furthermore, his consistency for Pat Lam’s Bristol and development - thanks to regular Premiership exposure since moving to Ashton Gate - certainly puts him at the very top of many fans’ wishlist for international selection.

Unlike many of the other players on this list, Jack Maunder actually already has a cap for England. Coming off the bench against Argentina in the summer of 2017, the Exeter Chief has made the nine shirt his own at Sandy Park since Nic White's departure back to Australia.

It is the exit of the Wallaby that has allowed Maunder to thrive. Starting in both the Champions Cup and Premiership Rugby finals, his calming influence has provided the bedrock for Exeter to play their own game against whichever opposition faces them.

??TRY TIME!@Jackmaunder dots down for our fifth and final try of yesterday's 35-22 victory over @gloucesterrugby.

Still only 23, Maunder has the capability to play consistent international rugby. Fully at ease with the system that he plays at club level, he could be a real option to Jones for years to come and whoever replaces the Australian post the 2023 World Cup.

Alex Mitchell’s potential progression to achieving full international honours has been on many people’s radars for a year now. Having first been selected into the England set-up as an apprentice, Mitchell has remained consistently involved in training squads.

Having appeared in five games for Northampton this season, he has only experienced a victory on one occasion, when he started against Worcester on Boxing Day. Getting to play consistently under Chris Boyd, his talents have already been noticed at an international level when he featured against the Barbarians in 2019 for an England XV side.

Who is most likely to step up and challenge for the England scrum-half spot in the future?

Because Mitchell has already been involved so heavily with the England squad, you begin to sit there and wonder when he will get his chance in a matchday 23. If it doesn’t happen this spring, when will it?

The youngest of these four scrum-halves at 22, Porter has benefitted from recent game time in the Wasps first team. Starting twice this season and making a handful of cameos from the bench, he is already on course to better his personal best of eight appearances in the 2019/20 season.

Previously representing England U18, Porter has been a part of the Wasps set up since finishing his studies at Merchant Taylors’ School. Spending time with Rotherham Titans three seasons ago, he has stepped up to the plate when called upon and his performances have possibly pushed him up the pecking order at the Ricoh and into the reckoning of Jones.

At the very least, Porter’s progression is a sign of the operator he could be at club level for years to come. Like Mitchell, you wonder if he could be worthy of an apprentice place, but with plenty of development ahead of him and the nature of this 2021 England Six Nations squad, perhaps more time playing in the Premiership could be to the benefit of his individual growth.

Young Leicester scrum-half Jack van Poorvliet has impressed in his various involvements under Steve Borthwick. Recently named in Alan Dickens’ England U20 EPS, Van Poorvliet gets to learn from two of the very best in Ben Youngs and Richard Wigglesworth on a day-to-day basis.

There will obviously always be chat about Bath’s Ben Spencer. The former Saracens man has been one of the most talked about players not involved with England. Seemingly making a breakthrough in the national side in 2019, the 28-year-old has had virtually no involvement under Jones since then and he will be hoping his club form will be rewarded sooner rather than later.